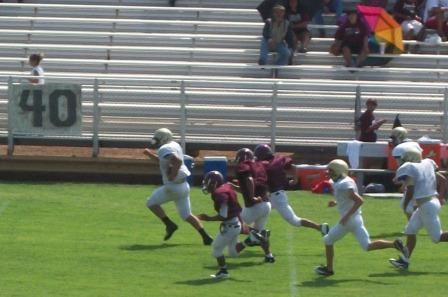 Senior Jacob Perez runs for a touchdown in Saturday's scrimmage against Ralls.

Perez and Brown find the Zone

A beautiful Saturday morning had great conditions for the Bold Gold's first competition of the 2011 season as they scrimmaged the Ralls Rabbits.  Both junior varsity and varsity squads mixed it up on the lush green grass at Jimmie Redman Memorial Stadium.

"I was impressed with the big play ability that our offense showed," commented first year head coach Steve Smith.  The big plays the coach is relating to are the long runs scrimmage by both sophomore running back DJ Brown and senior quarterback/tight end Jacob Perez.  Both had runs for touchdowns, possibly two apiece.  That's unofficially since stats were not kept for the scrimmage.  "We were trying to evaluate individual performances as well as team execution and did not keep stats", said Smith.

Intense enthusiasm by the coaching staff was well received by the young talented Lopes, most noticeably on defense.   "The defense did a good job for the most part getting bodies to the ball.  We also did a good job with our discipline and responsibilities against an option team."  Smith added "we also forced turnovers which are key to winning big games."

It was Ralls' defensive line which gave Post the most trouble at times with stopping-up the middle and hurrying the passing game.  Former Post coach Tim James is in his third season as head coach of the Rabbits.

Appearing first in the back field for the Antelopes was sophomore quarterback Pake Jones and running backs junior Vance Blair and Brown.  The trio as a group possess plenty of speed to execute a sound running game.  Smith explained "for the first time running a new system I thought the offense did okay.  We hurt ourselves a lot and we have to eliminate busted assignments and we can not afford turnovers."

This Thursday (8/18) it's the Lopes vs Lopes scrimmage at Abernathy starting at 6:00 pm. In that contest the coaches hope to make the adjustments necessary to be ready for the first pre-district regular season game against Sundown there on August 26.  "The biggest thing we need to do is to confidently execute our assignments.  Hesitation and uncertainly is slowing us down and I would like us to play faster and with more physicality", explained Coach Smith.

According to Smith, the Bold Gold "have the makings of a pretty good team.  The biggest factors we need to concentrate on is eliminating mistakes that hurt ourselves and building our strength and conditioning to play like we want to for 4 quarters and have no let up.  We must match our physical abilities with a mental toughness so we can close out games in the second half."

Click here to see pictures of the Ralls scrimmage.