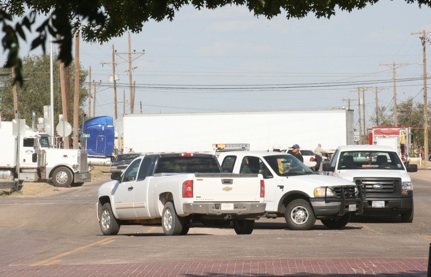 TxDOT vehicles help block traffic following an accident involving an 18-wheeler truck at the intersection of Hwy 380 and Hwy 207 Tuesday.

An automobile accident at the intersection of Hwy 380 and Hwy 207/651 (east of the railroad tracks on East Main) stalled traffic in Post for over 45 minutes this afternoon just after 5:00. While details are not available at this time, it appeared that at least three vehicles were involved: an 18-wheeler truck, a pickup truck and a medium-sized car. There were no immediate reports of injuries.

This latest accident at the intersection, locally dubbed “calamity corner,” raises questions as to whether more should be done to mark the stop signs for east/west traffic. According to a letter dated July 5, 2011 from Post Mayor Thressa Harp to the Texas Department of Transportation, the City of Post “has installed the largest “Stop” signs possible” at the intersection, yet accidents and near-accidents continue. The mayor asked TxDOT to reset utility poles that block the view of the stop sign and to install solar flashing lights on the “Stop” signs to make them more visible.

Mayor Harp received a reply on July 13 from Michael Stroope, P.E., Maintenance Engineer for TxDOT. In the letter Stroope stated that the mayor’s letter had been “disseminated to the various offices responsible for utility and traffic issues.” He further stated that TxDOT was “in the process of identifying all utility owners in the area [of the intersection] to determine a course of action for the site issue caused by the current positioning of the utility poles.” Stroope further stated that once the utility pole issue has been resolved, “our traffic department will evaluate the need for a flashing beacon.” While these assessments are in process, a word of caution: slow down as you approach this area from any direction and do not assume that traffic traveling east and west will stop before entering the intersection.