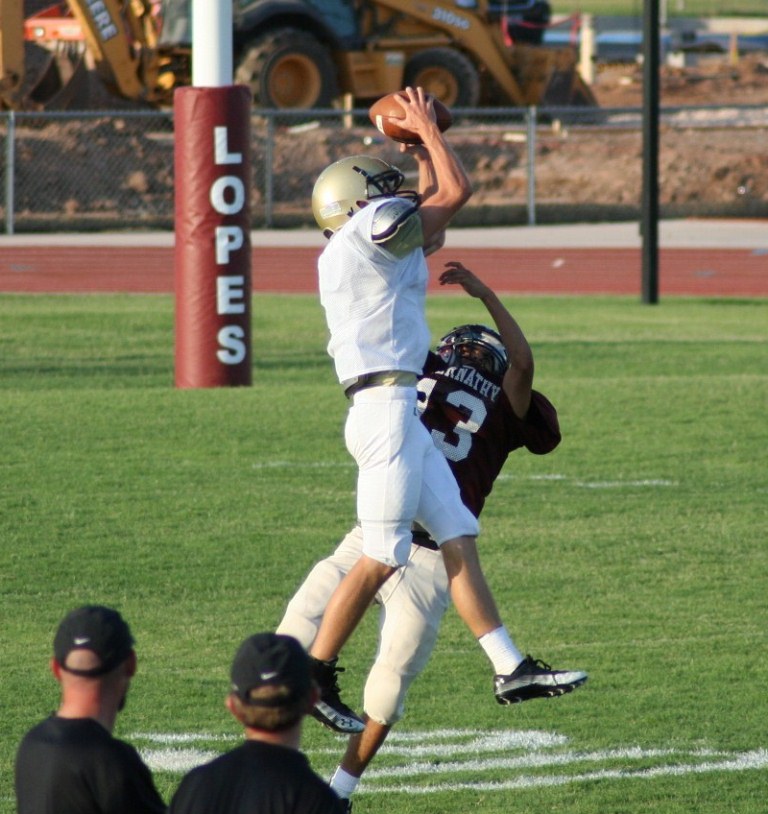 Dalton Holly leaped for a catch against Abernathy.

A special message from Coach Smith

ABERNATHY - Last Thursday, the second and final scrimmage of the 2011 football season was pleasing to the Post coaches as the Bold Gold (BG) played to a draw with the Abernathy Antelopes, three touchdowns each.

"If you had told me that we would beat Ralls soundly and tie Abernathy, a playoff team last year, I would have been happy before," commented Head Coach Steve Smith.  "But I have high expectations and the players are doing so well I think we can be a lot better.  I am okay with where we are, but we have to improve every week."  Abernathy, of District 1-2A, is expected to make the playoffs again this season.

Leading the BG out of the backfield and into the endzone twice was sophomore D.J. Brown.  The other Post score was from junior Caden Dean with about a 60 yard touchdown run.  The previous Saturday, Brown also scored twice in the Ralls scrimmage.

Quarterback Pake Jones opened the game with a 20 yard pass completion to senior tight end Jacob Perez.  From there, Post moved the ball at will making the first two scores.

Post showed a stiffling defense in the first part of the scrimmage as well, allowing Abernathy to score just once.  Later in the evening the momentum, points wise, shifted in favor of the A-Lopes.   In the second part, which was conducted more like a game, the BG continued to play hard nosed football.  Coach Smith agreed saying "we are trying to play the game in a more physical manner and I believe we are seeing improvement in that aspect weekly.  (Although) the learning curve for the new systems is still in play and we need to learn our assignments and improve our execution and trust what we are doing enough to play fast."

The Post Bold Gold Antelopes spend this week preparing for 1A powerhouse Sundown.  Check back Thursday for a preview of the game.  Also, if you can't make it to Sundown on Friday, listen to the game live via the internet on Post Sports Radio powered through PostSportsPage.com.

"Football is the consummate team sport the requires all the teams members to have a role and pull together, but  more than that it takes everyone in the families and community and school, working and pulling together to build a winning program.  There will be bumps in the road and challenges to our plan, but I invite everyone to support our players, our coaches and our program to the point we have a united front to all the opponents and naysayers who might be around.  Show these guys that everyone has there back and supports them to the fullest and give the team the confidence to go out and lay it all on the line."