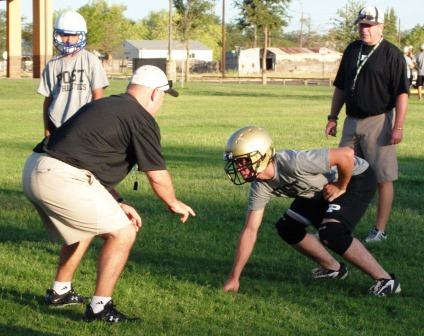 What can we expect of the Post Bold Gold Antelopes in the 2011 football season.  The gridiron bible says the Lopes will finish 4th in the seven team Division II, 2-2A district.  Dave Cambell's Texas Football (DCTF) magazine has defending state champs Idalou finishing first, Coahoma second and Stanton third.

When asked which team, if any team, has the best chance to unseat the Idalou wildcats as district champs, new Post head coach Steve Smith commented "Post" does.

Smith comes from a history of playing well in big games.  And depending on both teams' records come October 14, the big game here at Jimmie Redman Memorial Stadium hopes to be a smash mouth football game for the ages.  (See story about the 2011 schedule.)

During his time at Archer City, Coach Smith succeeded in knocking off teams who were either state champs or runner up the previous seasons.  He explained "We were in a district with Munday who won in '07 and we beat them by 50 (points) in 08.  Also, "we were in a district with Windthorst and we beat them twice the last five years and although they were not champs those years, they were finalists."

The week before the Bold Gold meet up with Idalou, they'll travel to Coahoma (10/7) and the week after to Stanton (10/21).  For the Antelopes to qualify for the play-offs, they may have to upset at least two of those teams and win the other three district games.

The magazine offers up Coahoma's QB Tanner Ruiz as the preseason offensive MVP and Idalou's Sales the defensive MVP.

After the top four, DCTF predicts that Forsan, Anson and Hawley will finish in that order.