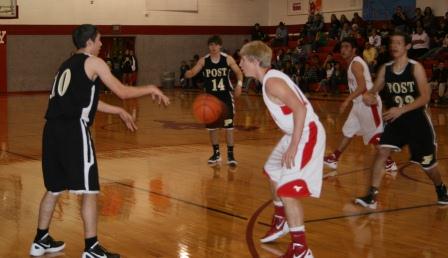 DENVER CITY -The Post Lady Lopes were just a three-pointer away from winning two in a row in District 3-2A action Friday dropping a game to the DC Fillies in the waning moments, 33-31.  Meanwhile, the Antelopes played a strong second half, but the Mustangs dominated the first to win the district opener for each team, 67-50.

The Post ladies (5-11, 1-2) were at a disadvantage before the girls made the two hour trip to Denver City.  In last Tuesday's game against Coahoma, starting center, sophomore Taylor Osborn suffered a major year ending knee injury.  Taylor will undergo surgery this week.  Family, coaches, teammates, fans and friends are praying for a successful operation and recovery.

The L-Lopes held a comfortable lead in the contest until 3:53 in the third period when D-City tied the game at 22 after hitting two 3-point shots in a row.  At halftime Post was up 17-13 and enjoyed as much as a seven point lead before the Fillies tied it.  From there the game went back and forth.  When behind by two, the Lady Lopes ran out of time while attempting a last second full court play to win the game.

The slow starting Antelopes adjusted their strategy at half time and kept up with the Denver City Mustangs, but couldn't make up the 15 point mid-game deficit (36-21) Friday at Denver City, losing the District 3-2A opener 67-50.  Post, now 7-6 for the season and 0-1 in district, swapped baskets with the fast breaking DC team in the second half.

The fourth quarter was a game in the paint as both teams' inside players consistently put the ball in the hoop.  Post was able to feed the ball to Jacob Perez as he got 10 of his team leading 14 points from within ten feet from the basket.  DC's Keyshawn Hawkins was difficult to stop as he recorded 8 of points in the fourth quarter mostly by layups as he lead all scorers with 26.

Earlier, Lopes Corbin McDonald and Vance Blair contributed from the outside both hitting two 3-point shots.  McDonald finished with nine points and Blair with eight.  Clancy David, a 6' 4" junior wing, added 16 points for the Mustangs including two 3-point shots from far beyond the arch.