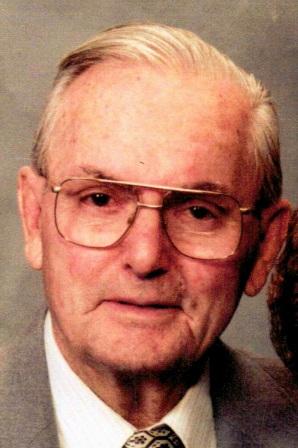 Pat (P.O.) Martin, 91, of Post was called home to be with his Heavenly Father on Decemeber 1, 2011 surrounded by his loving family.  Services will be 11:00 a.m. Monday, Dec. 5, 2011 in the Graham Chapel Methodist Church with Kate Hutson, Accolade Hospice Chaplin officiating.   Military rites will be at 3:30 p.m. at Resthaven Memorial Park in Lubbock.  Arrangements are under the personal care of Dee and Janet Justice, Justice-Mason Funeral Home, Post.

Pat was born Nov. 26, 1920 to Pearl Gee and John Edward Martin in Emory, TX.  He was one of ten children that grew up in and around Snyder, Tx.  Pat was raised in a large, loving family that would later leave a strong legacy behind.

As a young man Pat served in the U.S. Navy as a Ship's Cook 3rd Class, on the USS Midway.  After serving his country in World War II, he was honorably discharged in 1945.  Pat later met and married the love of his life Mary Frances Jamison Dec. 2, 1947 in Union, TX.  They had 3 children and raised their family in Post, TX.

Pat spent most of his working years in the oil fields.  He worked for Earl Chapman Oil Company and Rocker A Well Service.  He retired in 1985. After his retirement Pat spent his days enjoying time with his wife, kids and grandkids.  He enjoyed traveling with family,cooking and baking with his wife, and caring for family, friends and neighbors.  Pat never met a stranger and always went out of his way to spread happiness, caring and laughter to everyone he met.

He lost his son, Kenneth, suddenly in 1995 and his wife, Mary, passed away in 1999.  Pat would spend the next several years traveling to Austin, TX to spend time with his daughter, Patricia before she passed away in 2008.

Pat was an example of a strong family man who cared deeply for those he loved.  He always found something to keep him busy and stayed on the go in his white Ford F-150 pick-up truck until the last year of his life.  Pat became known as the "produce man" as he peddled produce and worked in the Farmer's Market at Slide Road and 98th in Lubbock, TX.  Pat liked to brighten everyone's day with a watermelon and a smile.

He was diagnosed with advanced stage lung cancer in August, 2011 and fought hard until the Lord called him home.  Even in the last months of his illness, Pat had a smile on his face and laughter in his heart.  He continued to show his strength and resolve until his very last breath.  Words cannot express how much Pat will be missed.

Pat is preceded in death by his parents and nine brothers and sistes; his wife, Mary Martin; his son, Kenneth Martin and his daughter Patricia Martin Rountree.

The family wishes to thank the staff of the Plaza Skilled Nursing Facility and Accolade Hospice in Lubbock for their loving support and care provided to Pat and the family the last months.