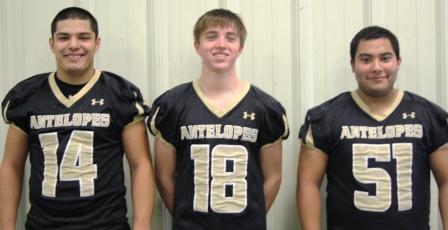 Post Antelope Dalton Holly, a junior, was rightfully honored and named as a first team member of the 2011 2-2A All-District football team for his performance at the receiver position for the Bold Gold.

The Lopes also had two seniors placed on the second teams.  Dale Diaz was recognized for his aggressive play on the defensive line and Jacob Perez in the linebacker position.  Diaz was also honorable mentioned as an offensive lineman.

Also noted in the Honorable Mention category were D.J. Brown as a running back and as defensive secondary player while seniors Matt Soto and Dakota McDonald were mentioned for their defensive play.

As many assumed, the District Champs Idalou Wildcats placed more players than any other team on the 2011 2-2A All-district football teams with 18 slots filled by the Wildcats including special honors positions.

The district's most valuable player was Idalou's Bradley Adkins.  His teammates, quarterback Alec Estes was declared the Offensive MVP and Mathew Sales repeated as the Defensive MVP.

Joining the Idalou trio in the top spots were Ty Johnson of Forsan as the Utility Player of the Year and Coahoma's sophomore Craig Miller who was named the Newcomer of the Year.

Idalou's first year head coach Don Long was honored as the Coach of the Year.  Long took the Wildcats into the Regional playoff game where they lost to Cisco ending an expected trip to the state finals.