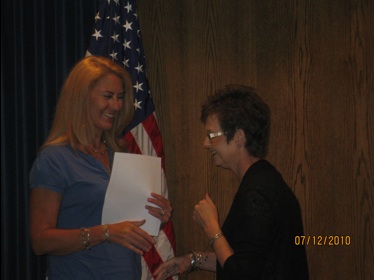 The newest City Council member Pixie Grisham, Ward 2 was sworn in at the beginning of the Post City Council regular on meeting July 12.  She was appointed to the place on the council after no one put their name on the ballot in the city election in March.  The spot was left vacant when long-time councilman Dick Odom chose not to run for another term.

The city has taken advantage of the drought conditions that left South Lake virtually dry.  "Our goals were to deepen the lake, remove mud and reline the shore," explained City Manager Arbie Taylor.  "We wanted to have a nice shoreline when we do have water in the lake again."  In addition, the island has been improved and a peninsula added that reaches from the shore out into the lake.  "The peninsula will be a perfect place for fireworks,"  Taylor said, adding that, of course, that will come when the lake is full again and and "we don't have a ban on fireworks."

T. K. Thompson received a certificate of appreciation from the City Council for his implementation, coordination, and execution of the South Lake project. He approached the city with the idea of cleaning up the lake shores and donated a large amount of his personal time during the project. Thompson wanted to “do something for the City to make us proud," Taylor said.  City employees Paul Perez and Billy Winkle were also recognized for their contribution to the work done on South Lake.

After the council approved the consent agenda, the minutes from the regular June 14 meeting were approved as were invoices received for July 2011.

The city manager presented a proposal to have Grimes and Associates conduct an inspection of the Garza Theatre building.  The building is owned and maintained by the city.  The council approved the request.

Diane Torres presented a request for an awning to be placed on the Church of God Of Prophecy building located at 601 W. 14th Street.  The city will follow the normal procedure of notifying property owners in the area of the request for a variance and will communicate the results to Torres.

Millie Sentell, President of the Board of Directors for the Caprock Cultural Association presented information about the Texas Plains Trail Region Roundup that will be held in Post, August 15 and 16.  Approximately 150 participants are expected at the event, approximately half of which are expected to stay the night in Post.  The Caprock Cultural Association requested $2500 Hotel Occupancy Tax funds to help with the expenses for the event.  The council approved the request.

City ordinance 614 regarding water use by individuals or entities located outside the city limits was discussed and approved as presented by the City Manager.

The first budget workshop for the 2011-2012 budget was the final business of the meeting.  City Manager Taylor presented a recap of projects completed by the city funded in the 2010-2011 budget.  (See details in upcoming story in the Garza Post.)  He also provided an overview of the proposed 2011-2012 budget, noting that all dollar amounts were estimates.  Budget discussions will continue at the next City Council meeting, August 9.