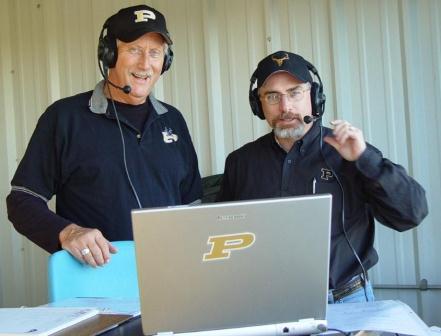 Basketball and More Added to Schedule

In the upcoming 2011-2012 school year, fans of the Post High athletics program will hear live coverage of their Antelopes and Lady Lopes -- thanks in part to a partnership with Post Sports Radio (PSR), a division of Post Sports Enterprises.

For the third consecutive year, Plummer and Allen Grisham will handle the play-by-play and color commentary duties during the football season.

In addition to football, the agreement with the Post Independent School District describes that away basketball games and playoff games for all sports will be added to the webcast schedule this year.  Plummer said “we’ve only done football games the past two years.  This year we thought adding the away varsity boys and girls basketball and playoff games would be great additions to the schedule.”

Plummer brings more than 20 years of broadcast and audio production experience to the operation.  For the past four years, he's also served as the public address announcer at the PHS home basketball games.  Plummer graduated from Texas Tech University’s Mass Communications Department in 1987.

Allen Grisham’s knowledge of and enthusiasm for high school sports adds greatly to the quality of the webcasts.  Two of his sons are products of Post High School athletics.  One of them went on to complete a four year college football career at Hardin-Simmons University.  Also, Allen served as the Antelope Booster Club president for four years.

Plummer explained that the internet opens up listenership of Post athletics to the world “wherever Post sports fans are located.”  According to listeners’ responses via email, Antelope football fans were listening from Canada to the Caribbean and everywhere in between over the past two seasons.