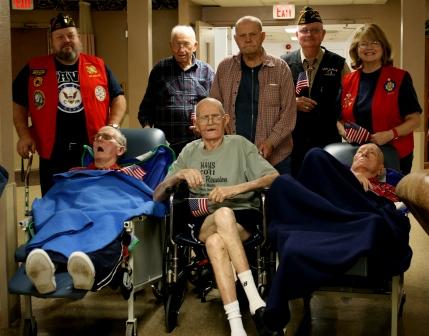 Representatives of VFW Post 6797 visited Golden Plains Nursing Home to honor veterans who reside at the facility.  The wife of U. S. Army veteran J. B. Jones, Doris Jones, was also honored.  Mrs. Jones was a "war bride" and came to the United States from England.  When Jones met his future wife, she was working at Westlands helping build Spitfires, the famous planes of WWII that rivaled the German fighters.

The veterans and Mrs. Jones were presented with small American flags and traditional buddy poppies were given to residents.

Many still associate the buddy poppy with the observance of Veterans Day, but may have forgotten how the small, simple red poppy became an important symbol.  We found this brief history of the buddy poppy at www.cal-mum.com:

In the World War I battlefields of Belgium, poppies grew wild amid the ravaged landscape. How could such a pretty little flower grow wild while surrounded by death and destruction? The overturned soils of battle enabled the poppy seeds to be covered, thus allowing them to grow and to forever serve as a reminder of the bloodshed during that and future wars.

The poppy movement was inspired by the poem "In Flanders Fields" written by Lieutenant Colonel John McCrae of the Canadian forces in 1915 before the United States entered World War I. Selling replicas of the original Flanders' poppy originated in some of the allied countries immediately after the Armistice.

Around 1924 the American Legion Auxiliary adopted the poppy as the organization's memorial flower and pledged its use to benefit servicemen and their families. Today, the buddy poppy continues to provide a financial and therapeutic benefit to those hospitalized and disabled veterans who construct them, as well as benefiting thousands of other veterans and their families.