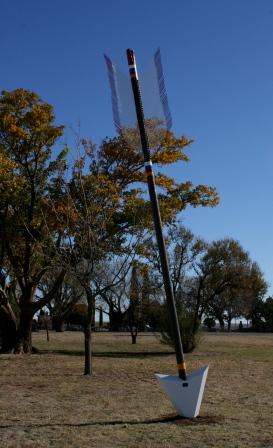 The Quanah Parker arrow at the Terrece Cemetery is one of two arrows installed in Garza County. The other is on the north side of the Garza County Historical Museum.
(Click the above photo to see additional photos)

Recently two 22-foot steel arrows were installed in Post to signify yet another facet of our local heritage.  One of the arrows is at the Garza County Heritage Museum and one is just west of the entrance to Terrace Cemetery. The arrows signify Garza County as part of the "Quanah Parker Trail.  This trail is sponsored by the Texas Plains Trail Region as a way of acknowledging the history that all counties in the Plains Trail Region share:  all were once part of the "Comancheria."

In order to secure a place on the Quanah Parker Trail, each county must complete a research questionnaire.  Dr. Tai Kreidler, with Texas Tech University Southwest Collection and the West Texas Historical Association, assists in ensuring historical integrity, accuracy and authenticity in the research content.

The arrows, sculpted and donated by artist Charles Smith of New Home, TX., have been approved by Comanche descendents of the Quanah Parker family.

The artist, who is of Native American descent, first developed the skill of welding to make repairs in his farming business.  Later it developed into an art form.  Smith has built a reputation for making large metal palm trees that have been installed in Lubbock, Dallas, Houston and Austin.  The artist donates the arrow sculptures which are now in 9 of the 52-county Plains Trail Region: Crosby, Motley, Terry, Knox, Foard, Hardeman, Dickens, Cottle and Garza.

Quanah Parker (c. 1854 - 1911) was the chief of the Comanches, who were the most powerful Native American presence in this region.  The chief is considered by many historians to rank among the outstanding native sons of Texas.  He was the son of Comanche chief Peta Nocona and Cynthia Ann Parker, a white woman, who had been kidnapped at the age of nine and assimilated into the tribe. Quanah Parker led his people on the reservation, where he became a wealthy rancher and influential in Comanche and American society. With five wives and 25 children, Quanah had numerous descendants. (www.wikipedia.org/wiki/Quanah_Parker)

According to the Quanah Parker Trail web site (https://www.quanahparkertrail.com/) the story of the Comanche chief stretches beyond geographical scope.  “More meaningful than the miles Quanah traveled is the distance he covered between disparate cultures and the transition he made between different ages in the history of the American West. For better or worse, Quanah led his people into the 20th Century.  These impressive arrows are a reminder of Native American influence on Garza County.