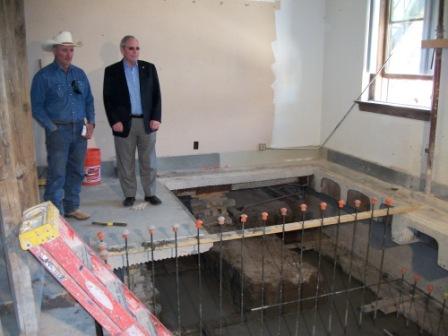 The Ups and Downs: Part 1

Depending on who you talk with, the elevator issue at the courthouse has been discussed for at least 20 years.

After August 15, 2011 when the Garza County Commissioners’ court voted unanimously to hire a contractor to install an elevator inside the building, reality sunk in, fast.

Pharr & Company’s bid was chosen over the other four submitted and they wasted no time to get started on September 6th.

The location of the elevator consumes most of the clerk’s imaging/early voting rooms on the first floor, the break room on the second floor and into the former courthouse balcony/storage area on the third floor.

When the decision to install the elevator was made, there were many questions by those who would be affected by the construction that needed to be answered.  To make a long story short, the treasurer’s office moved to the former sheriff’s office just behind the courthouse, the county attorney moved across the street to share a building with the probation department and the clerk’s imaging/early voting room relocated to the former drivers’ license room just down the hall close to the north door.  (The DPS ceased offering a satellite drivers’ license location about a year ago.  They are discussing coming back to Post, but they’re not sure when.)

Because of the forethought over the years by the county commissioners the $308,000 project was paid for before it started.  Funds have been put aside for the project for the past 10 years according to County Judge Lee Norman.  "In 2007 we had about $108,000 built up.  When I came in office nearly 5 years ago we began saving at a faster rate than before," said Norman.

The elevator construction project is on a 145 day schedule and should be completed by the end of January.

I'll keep you updated with pictures as the project progresses.