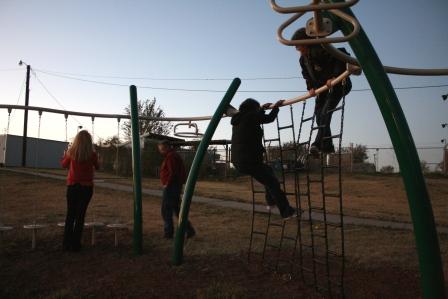 After conducting business as usual in council chambers Tuesday afternoon, the Post City Council made it to the city park just before dark to try out the new playground equipment. Shown here (from left) are council members Pixie Grisham, Mark Short, Melba Cimental and Anita Morris.
(Click the above photo to see additional photos)

In the regular city council meeting Tuesday, Nov. 8 after approving minutes from the Oct. 18 meeting and approving invoices for Nov. 2011, the council also approved Resolution 369 that elected Councilman Mark Short to the Board of Directors for the Garza Central Appraisal District.

City Manager Taylor told the council that he had received a call from a representative of Post City Festivals rejecting the funds allocated to that organization because the amount approved was not enough to fund their event.  There was discussion about what to do with these funds and it was decided that these funds will be held in reserve until the HOT committee assigns the money.

Taylor recommended that the HOT funds be disbursed to the organizations quarterly when the city receives the funds rather than making a payout based on projected amounts.  The council agreed to follow this procedure.

The City Manager discussed the Routine Airport Maintenance Program (RAMP) grant explaining that he had prepared a proposal for $25,000 to cover routine maintenance at the airport such as crack seal, mowing and electrical maintenance.  Once Garza County has "signed off" on the proposal and it is submitted to the state, the local airport will receive 50% reimbursement.  The council voted for Taylor to proceed with the proposal.

City Attorney Slater Elza reported that the White River Contract steering committee received the revised contract and  there are some issues that need to be addressed, specifically the issue of whether participating cities can have an alternative water source and the length of the contract.  However, Elza stated that he believed “we are on the right track.”

During the “communications from citizens” portion of the agenda, there was discussion about the efficiency and positive attitude of city employees when dealing with the public.