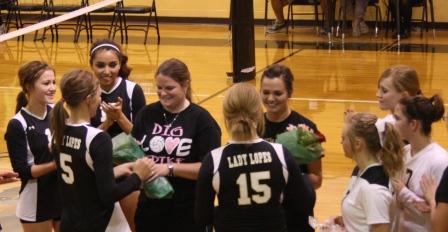 Coaches Charlyn Hohman (left) and Brettnie Reed are thanked with roses from the freshmen and JV volleyball squads at the final home game on October 24, 2011.
(Click the above photo to see additional photos)

This past Monday, the girls played at home for the last time of the 2011 season.  Head Coach Charlyn Hohman said "even though we lost to a varsity team we showed improvement and earned every point," against the Lubbock Titans; 13-25, 14-25, 17-25.

Just before the first serve, the freshmen and JV teams presented Coach Hohman and Assistant Coach Brettnie Reed with a bouquet of roses each to thank them for a good first season.  "I had no idea the girls were presenting us with flowers and a little speech. That was really nice of them. The girls have been great all year," said Hohman.  (Click on the photo above to see more from the JV Lubbock Titans game.)

Since this was Post's first year playing volleyball, the season was a non-varsity schedule at which Hohman went to great lengths to assemble a very busy itinerary for the four junior high teams and the two high school teams.

The coaches and fans alike have witnessed many positives. "The girls have shown lots of improvement and had a great attitude all season," said Hohman. "Even other schools have complimented us throughout the season on how well we are playing. Most schools that start out in a first year program don't have as much success as we have had and struggle doing simple things like hitting and blocking."

Hohman acknowledged the lack of pressure without a playoff possibility this season. but "next year I believe we can compete with other schools. Our goal is to win games and push for the playoffs," she said.

Their were four teams in the Post Middle School this year.  This past Monday, both the 7th and 8th grade Black teams competed against Olton to close out the season.

Although both Post teams lost, Coach Richard Soliz was pleased and is encouraged for the future of the volleyball program.  "These girls have played with a lot of heart this season, and the progress they have made is astounding.  They will do some great things in the near future.  The district next year had better watch out for the Post Lady Lopes," said Soliz.

He added "thanks to all the family and friends for supporting us throughout the season."

(Click HERE for photos from the JH teams' games vs. Olton.)