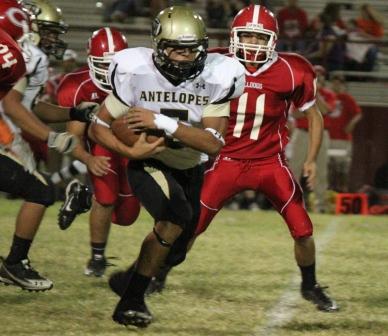 Matt Soto carries the ball from the fullback position for a first down.
(Click the above photo to see additional photos)

Four TDs Not Enough for Lopes

COAHOMA – The score, 47-29, isn’t a true depiction of the District 2-2A, Division II game between the Bold Gold and Coahoma Friday at Bulldog Stadium.

The Lopes (1-2, district) lost two fumbles in their first two possessions of the game. The defense responded and kept the ‘Dogs from converting the turnovers into points.  Post’s “D” succeeded in containing the district’s offensive MVP quarterback Tanner Ruiz in the first half and for most of the game.
But in the second half, the Bulldogs found holes to run through to put 33 points on the board and claim the win.  “Coahoma made some good adjustments at half and Ruiz stepped up his game and our defense did not match the intensity needed to stop them like we did in the first half,” said Post’s Head Coach Steve Smith.

Coahoma ran for 368 yards on 45 carries on the evening.  They garnered 286 yards in the second half.  Running back Aaron Acevedo scored all four of his touchdowns in the final twenty-five minutes of the game.  His first coming with :41 remaining in the first half that gave Coahoma the lead at half time, 14-7.  Three of his scores were 45, 55 and 57 yard runs from scrimmage.  He was the game’s leading rusher with 193 yards.  Quarterback Ruiz and running back Justin Coker both had 76 yards apiece.

The Antelopes had the team’s second highest scoring effort of the season.  Even though four turnovers hampered Post’s chance of winning two in a row, the offense still produced impressive numbers.

Fullback Vance Blair again led the Lopes in rushing with 113 yards on 17 carries.  Tailback D.J. Brown added 103 yards averaging almost nine yards a touch and had another TD.  Quarterback Pake Jones ran for 56 yards with two ground touchdowns and added another TD by air with an eleven yard play action strike to Jacob Perez in the end zone.  Jones passed for 86 yards with his longest being 32 yards to Dalton Holly.  Holly led all receivers with 3 catches for 63 yards.

The Lopes surprised many with going for the one-point point-after-attempts following all four touchdowns.  That night Jacob Perez was 3-for-4 kicking the ball through the up-rights.  Coach Smith credited the improvement to “practice, hard work and coaching.”  The one failed try was actually turned into a two point conversion when Perez’s kick was blocked, bounced around and ended up in the hands of long snapper Nathan Gill and he proceeded to cross the goal line for two points with 4:49 in the fourth quarter and the score 40-29, Coahoma.

“The offense is learning and we are getting better at taking advantage of the defense and how they are playing us,” said Coach Smith referring to his team’s success converting 8 of 10 third down attempts.  He added, “We still are inconsistent at times and we make too many mistakes but the potential is there and we are improving.”

Lineman Dale Diaz was honored with the Post Insurance "Antelope of the Game" by the Post Sports Radio crew.  Diaz was credited with seven solo tackles and provided the team with senior leadership throughout the game.

Coach Smith concluded that “the junior high teams and the JV team all had good wins and the varsity fought hard.  Overall it was a good week and even though we suffered a very disappointing loss, we continue to improve.”

Listen to the archived podcast of the varsity game on Post Sports Radio.  The podcast is usally ready in the late afternoon on Saturday.