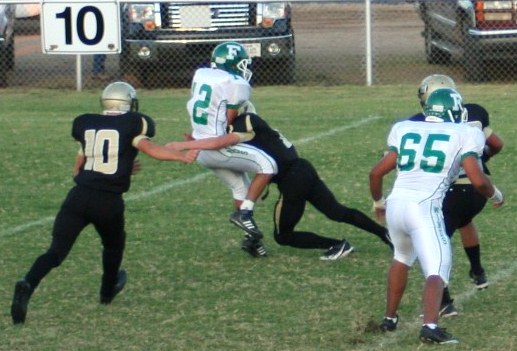 Caden Dean sacks the quarterback while Dakota McDonald (#10) follows up.

REDMAN STADIUM - The Bold Gold Antelopes score a season high 34 points but it's not enough to contain the Floydada Whirlwinds who put 42 on the scoreboard.

In an attempt to regroup after not scoring in the previous game against Slaton, the Lopes, now 1-3, came out fighting and matched the number of points, 22, that they've scored in the first three games of the season just in the first quarter against Floydada (2-1).  The first quarter ended with Post up 22-8 in the final pre-district game.

"This offense is designed to take advantage of what the defense is giving us, but to have that mindset you have to establish a threat.  The base veer has become that threat and teams are playing it in such a way it opens up the play action passing game," said head coach Steve Smith.

The first quarter started with the Lopes receiving the kickoff and a couple of plays later, sophmore running back D.J. Brown ran for a 69 yard run to put the Lopes on the board first.

Post's next possession was obtained from the Lopes forcing a three play and punt Whirlwind possession.  Fullback Vance Blair, who just returned from a two game layoff, topped off a 59 yard drive with a 17 yard touchdown run making the score 14-0, Antelopes.

The third Lope TD of the opening quarter followed a Floydada score when quarterback Pake Jones kept the ball to cross the goal line from the one yard line to finish a four play possession covering 65 yards.  The scoring drive was highlighted by a 57 yard pass from Jones to fellow soph Campbell Kirkpatrick that put the ball on the 11 yard line.

The second quarter showed a shift in momentum favoring the Whirlwinds as they scored 14 points to tie the game at 22 going into the locker room at halftime.

The third quarter was a defensive game for both teams with Floydada tacking on six more points while the Lopes failed to score in two consecutive quarters.  The score was 28-22 going into the final period.

Early in the fourth, the Lopes punted to Whirlwind Jordan Woody who returned the kick 39 yards for six points advancing the score to 34-22.  After receiving the ensuing kick-off, the Lopes, trying to get back the momentum, marched from the Post 28 yard line in seven plays when Brown got his second TD of the evening on a six yard rush:  34-28, Floydada up with 7:25 remaining in the game.  In that drive with Post facing second down and 10 from the Floydada 44 yard line, receiver Dalton Holly caught a 38 yard pass from Jones to place the ball six yards from pay dirt.

With 6:40 on the clock, Cole Covington shocked the Lopes with 42 yard TD dart and the 'Winds converted a two point PAT to increase Floydada's lead.

With the Bold Gold down by 14 points, they didn't give up.  On the next possession, Post scored again topping a seven play drive at the 4:21 mark to tighten the score at 42-34.  Again, Jones found Holly this time for a 34 yard completion to the one yard line.  After a timeout, Jones punched it through on a QB keeper for his second rushing TD.

After that, the teams exchanged interceptions and the Whirlwinds were able to run out the clock to claim the win, 42-34.

On the evening, Jones out passed his counterpart Jose Martinez completing seven passes for 189 yards for a 13.5 yard average.  Martinez was 8 for 18 for a total of 170 yards. Holly was the game's leading receiver with 122 yards.

The Lopes also improved on the ground running for 249 yards on 50 tries averaging almost 5 yards a touch.  Running back D.J. Brown led all rushers with 149 yards on 18 carries.

Coach Smith said "I think we are getting better each week and the players really love how this offense is starting to click," as was evident in this game.

On defense, Jacob Perez led the Antelopes with five solo tackles while Blace Stevens had four himself.  Safeties Steven Howard and Holly both had an interception.

Commenting on his teams progress, Smith said "the difference between failure and success is doing things nearly right and doing it exactly right and that is where we are with this team."  He added "I really love this community, school and especially the kids here and I want them to experience the joys of winning."  Coach explained that "we all as a community, school, and family can stay strong behind these guys and let them know they are getting better and that WE BELIEVE in them.  They can be a very strong team."

Junior receiver Dalton Holly was awarded the Post Insurance "Antelope of the Game" by the Post Sports Radio crew.  Holly caught 5 passes for a game leading 122 yards and nabbed an interception from the safety position.

See the JV game summary after the varsity stats.

FLOYDADA - The Post JV traveled to Floydada Thursday Night and lost a hard fought battle to the whirlwinds.
Despite only scoring 12 points the offensive had several long drives.

Paden Babb scored the first TD for Post on a 9 yard run mid-way through the 2nd quarter to bring the Lopes within a touchdown.

Carson Kirkpatrick's INT in the endzone prevented Floydada from extending their lead at the end of the half.

The Bold Golds final touchdown came on a Marcus Erives 4 yard TD run with 8 minutes remaining in the contest.  Both PAT attempts failed for the Antelopes.