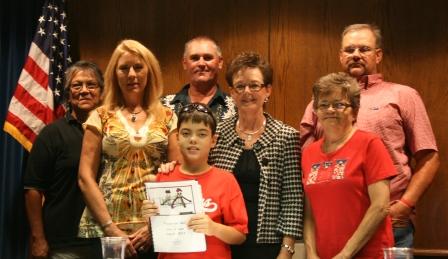 Nathan Taylor (center) is shown with the Post City Council and Mayor Harp. Taylor attended the September council meeting to thank the council and city manager for their interest in upgrading the playground equipment at the city park.

The agenda item to consider and approve the City of Post municipal budget for fiscal year 2011/2012 came at the end of a lengthy city council meeting.  However, City Manager Arbie Taylor was again very straightforward and succinct in presenting the proposed budget numbers.  Taylor asked the council to approve a total operating budget of $6,799,128.  This figure is broken down as: General Fund $4,177,178 and Water & Sewer $2,621,950.  Restricted budget line items, including Hotel Occupancy Tax Fund total approximately $69,000.

Taylor also asked the council to consider and approve combined municipal ad valorem taxes in the following amounts:  Maintenance and Operation 0.370172, Interest and Sinking Fund 0.199323.  These amounts make an effected tax rate per $100 assessed valuation of 0.569495, the same as 2010/2011.  The City Council approved both measures.

In other business before the City Council, a representative of the family who owns property on Hwy. 84 spoke to the council regarding the issue that said property has been out of compliance with city codes for some time.  It was reported that progress has been slow because only one person is doing the work on the structures.  The City Manager asked that work continue to move forward so that at certain intervals the City Code Enforcer can verify that progress is being made.

The City Manager presented information regarding approval for construction of an airport hangar at Post Garza County Municipal Airport.  The individual seeking approval “has done everything exactly as he needed to do.  I recommend that we approve the information furnished so construction can begin,” Taylor said.  “We would then sign a standard airport agreement.”  Taylor added that he had asked that the individual share all information with Garza County as well.

The Council considered Ordinance 617 setting forth rules, regulations and requirements related to the fencing and enclosing of private swimming pools.  The proposed ordinance follows state law regarding this issue.  Public notice of the proposed ordinance will be published soon.

The council voted to give approval for the City Secretary to issue Requests for Proposal for depository services.  This is required by law every 3 years and involves sending notices to banks in the area regarding banking services for the city.  Results of the RFPs will be presented at the October council meeting.

The council approved the sale of property located at lot 11 block 129 Old City of Post.  Resolution 368 was also approved; this resolution primarily changes the wording of fund balance application.

The council gave a variance to Iglesia De La Profecia Church to allow for an awning on their building at 602 W. 14th St.

During the meeting, two citizens made comments to the council.  Garza County Commissioner Pct. 3 Ted Brannon thanked the City Council for their work and cooperation with the county on budget issues.

Nathan Taylor thanked the council, city manager and mayor for their plans to upgrade the playground equipment at City Park.  He expressed appreciation for their time spent on the issue and for “putting tax dollars back into the community.”  The 8-year-old had earlier prepared a presentation for the city regarding a plan for a future park as well as his suggestions for playground equipment.  “Nathan and I were on the same page,” City Manager Taylor said.  “The new equipment I planned to order for City Park was the same as Nathan’s suggestion.”

Minutes from the regular council meeting August 9 were approved as well as invoices received at city hall for September, 2011.  Due to an upcoming Texas Municipal League meeting, the next City Council meeting will be October 18.