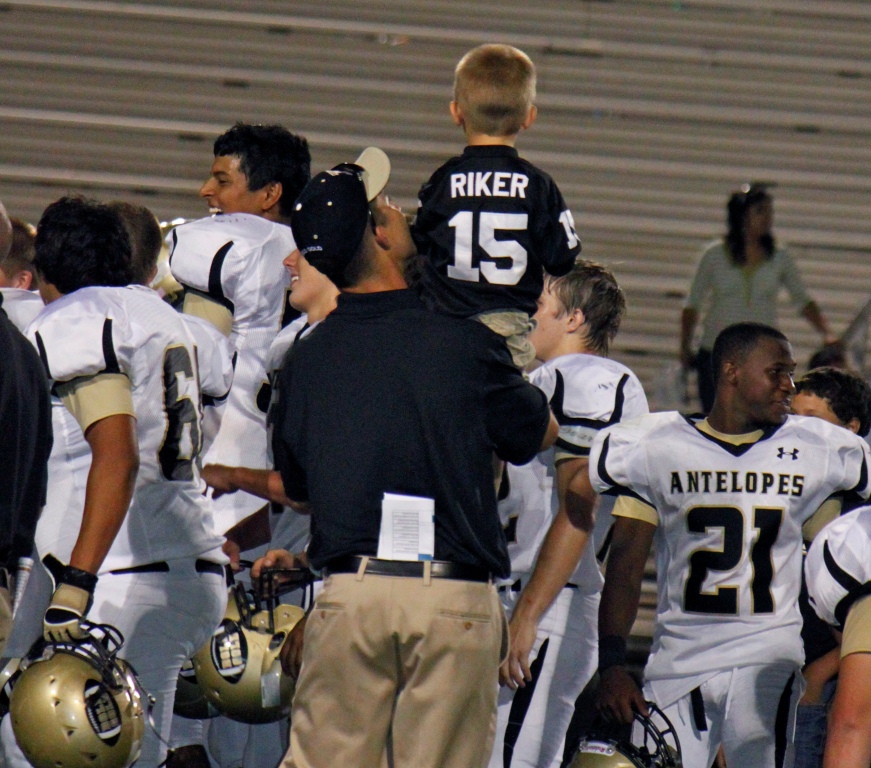 Antelopes Come from Behind to Beat Lamesa

LAMESA - The Post Bold Gold Antelopes flexed stength and character by coming from behind to get their first win of the 2011 season against Lamesa Friday night at Tornadoe Stadium, 14-7.

The Lopes were a different team from the previous week's opening season game loss to Sundown, 50-8.

The Lopes chose to defer after winning the coin flip and kicked off to the Tors' to start the game.  Lamesa's Layne Hatchett received the kick to cover 85 yards to give his team their first and only score.  Emiliano Renteria kicked the extra point making the score 7-0.

At that point, especially since following the Sundown game, some expected the Lopes would be deflated and the game already over.  But, that was not the case said head coach Steve Smith.  "As a coach you have to remain focused and calm.  A game had over 100 plays in it and one play is just that.  We stay positive and coach them to fix mistakes and improve."  Post, now 1-1 on the season, adjusted where needed and finished the contest to enter the win column.

The Lopes' defense proved it's stamina throughout the game eventhough it was outsized by the Lamesa offensive line.  Smith explained, "We learned from last week that to be successful, you have to have good technique, you have to trust you teammates and you have to execute your assignment.  We were able to stay lower and we attacked the line of scrimmage better and it paid off."  Post held the Tornadoes to just 125 yards of total offense.

The Bold Gold were next to score but not until almost halfway through the third quarter when D.J. Brown ran for his second touch down of the season on a 16 yard scamper.  The two point conversion failed leaving the Lopes one point down, 7-6.  Brown, a sophomore, ran for 54 yards on 16 carries and caught two passes for 15 yards.

Post entered the game with three would-be starters in street clothes.  With injuries plauging the Lopes, according to Coach Smith, the rest of the team had to dig deep to produce a win for the program.  "A team is made up of lots of players.  If a player is injured it is an oppurtunity for someone else to step up and carry the load.  I don't look at it like we have 11 starters.  We have 22 (players) because I expect the backups to come in and perform at a high level also."  He added, "I thought we were the better conditioned team.  When you can go on the road, start 8 or 9 sophomores, replace three injured starters, and coming off a particularly bad loss the week before, come together as a team and trust the system and play 4 quarters then you have shown a lot of character. I am very proud of our players and coaches."

The most exciting part of the game was when Post controlled the ball for most of the fourth quarter covering 75 yards in 14 plays.  Topping off the decisive scoring drive was quarterback Pake Jones who punched it in from the one yard line to take the lead.  Matt Soto ran for a two point conversion from the full back position, changing the score to 14-7.

Following the late game touchdown and to keep the ball away from Lamesa, Post's Jacob Perez executed an on-side kick with Lope Dalton Holly falling on the ball giving the Antelopes possession to run out the :40 remaining in the game.

"Our improved play was  a total team effort, but I will say the football games are won in the trenches and our offensive and defensive lines gave us a great chance to win the game," summarized Coach Smith.

Want to comment on the game?  Scroll to the bottom of this page and speak your mind.

Click here to hear a podcast of the game.

The Post JV won their first game of the season on Thursday Night 30-22, over the Lamesa Golden Tors.
Blaine "Oz" Osborn knocked down the Tors attempt to tie the game as time expired.  This was a good game for the JV team after falling the week before vs. Sundown.

The JV fought tooth and nail to preserve the victory.

Dylan Pearson got the Lopes on the board in the first quarter with a one yard TD run, QB Carson Kirkpatrick added the 2pt conversion to give the Bold Gold an early 8-6 lead.

Keaton Collins added to the Lopes lead with a 50 yard run in the 2nd quarter, the PAT failed.  Leaving the score at halftime 14-6.

The offense and defense struggled during the earlier minutes of the 3rd quarter, allowing the Tors to tie the game at 14.
The Lopes were able to put together a scoring drive to take a 22-14 lead mid-way through the 3rd behind the blocking of Jason Walden, Alan Alaniz, and Colton Stamey for Carson Kirkpatrick's 25 yard TD run.  Marco Erives added the 2pt. PAT on a bootleg pass from Kirkpatrick.

The defense sealed the victory during the final seconds as Osborn knocked down the Tors "Hail Mary" pass in the endzone.