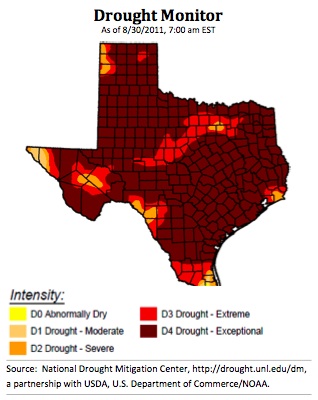 Cattle continued to be liquidated at high rates due to depleted forage and water sources in most areas of the state. Producers continued to import hay to replenish supplies; however, freight costs were a concern. Producers were in need of rain to plant winter forages across most areas of the state. In areas of the Plains and Cross Timbers, forages greened due to earlier rainfall; however, more rainfall was needed for continued growth. Fire danger remained high across the state, while wild fires were active due to windy conditions.

Wheat land preparation made good progress due to cooler temperatures and improving soil moisture retention in areas of the Plains and South Texas.

Corn:  irrigation and insect infestation slowed in areas of the Plains, while corn harvest continued.

Fall vegetable land preparation and citrus irrigation were active in areas of the Lower Valley.

Areas of the Plains and East Texas received up to 2 inches of rainfall, while the rest of the state received scattered showers.