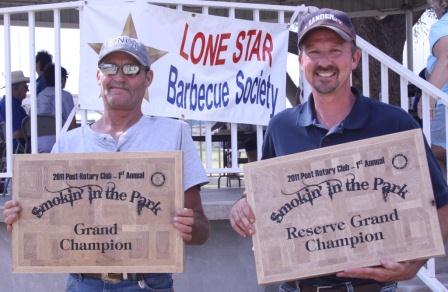 Terry Roberts (left) of Justiceburg and Clay Ham of Gail earned the titles of Grand Champion and Reserve Grand Champion respectively at the 2011 Post Rotary Club First Annual "Smokin' in the Park" barbecue cook-off. Will they repeat at the 2012 event set for August 24-25?

2012 Cook Off Proclaimed a State Championship

The second annual Post Rotary Club sponsored event has gone from a sanctioned event to a state championship cook off in less than a year.

The first ever "Smokin' in the Park" barbecue cook off in September 2011 was a successful event.  It's success had much to do with the recent proclamation making the 2012 cook off a Lonestar Barbeque Society (LSBS) sanctioned Texas State Championship.

"In January 2012, I submitted a request to Senator (Robert) Duncan's office to proclaim it as a State Championship," explained organizer Kerry Dixon.

Dixon, the warden at the Dalby Correctional Facility,  is one of many MTC employees who have embraced the weekend cooking culture and are responsible for making the cook off in Post a first class gathering for enthusiasts from around the region and state.

"Having this cook off proclaimed as a State Championship will increase the number of competitors because if they win a State Championship cook off, they become eligible to enter the famous American Royal in Kansas and the Jack Daniels Invitational in Lynchburg, Tennessee.  It's a big deal in the world of competitive cooking," said Dixon.

Members of the LSBS will come to Post for the weekend of August 24-25, 2012 to see that the cook off is conducted by it's rules and standards as the aroma of beef, pork, chicken and beans will fill the air at the City of Post park.