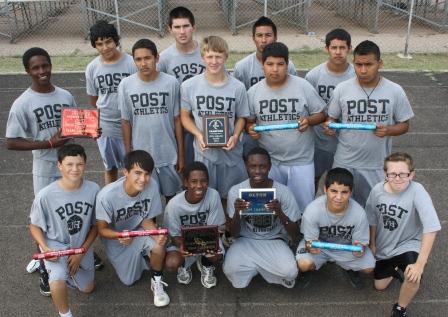 ACUFF - The end result of the District 3-2A junior high school was a surprise to many when Denver City outscored the formerly undefeated 8th Grade Post Antelopes.  Even with 194 points, the Bold Gold didn't have the number of competitors to keep up with the D-City Mustangs' 247 total points.

As previously reported on The Garza Post, this group of boys went into this year's district meet with an unblemished two year record.

Coach Kevin James expressed "I would like to say that this has been an outstanding track season for Post JH track and field. These young men competed extremely well at each and every track meet we attended, and I heard many comments throughout this season, about the talents of this group of boys."

With that said, both the 8th grade and 7th grade boys performed well with some credible team and individual results.

Individuals coming in first place in their respective events were Solarzano in the 400 meter dash, Wiley in the 110 hurdles and Gilbert in the 300 meter hurdles.

Other top 8th grade finishers were Reece who came in second in the 100 meter dash, Wiley third in the 200 meter, Curtis was third in the triple jump and Solarzano third in the long jump.  Wyatt Gray pole vaulted 9' to place second and in the discuss event Gonzalez finished second and Jaybren Rodriguez third.  Rodriquez also placed third in the shot put.

The 7th Grade boys posted 110 points in the district meet for a fourth place team finish.  The Lopes were led by Colton "Bull" Smith's winning shot put throw of 35' 2.25" and his third place discus sling of 91'8".  Teammate Ben Ayala threw 90'6" for fourth place in the discus.

Again Post showed-up well in all three relay events placing third in the sprint, the 4-by-200 and the mile.

For the team and individual results, please see the lists below.

Coach James added "the future looks very bright for Post track and field, and as I told these young men, I expect to see some of them competing at the State Track Meet before their high school careers are over."