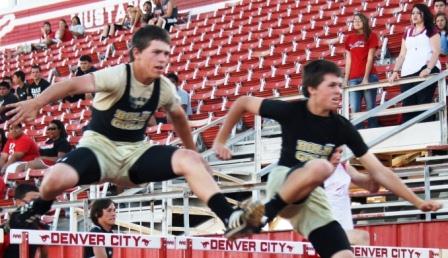 The Kirkpatrick duo, Campbell (left) and Carson, are seen leading the pack in the 110 meter hurdle event. Also, the brothers went on the finish 2nd and 3rd in the 300 meter hurdles.
(Click the above photo to see additional photos)

"I knew they were a good group of kids and that they would have a shot at the District Championship," said Head Track Coach Beau Riker. " But, I didn't realize that they were going to dominate their opponents."

The young athletes made up of freshmen and sophomores performed exceptionally well claiming at least one of the top three spots in eleven of the seventeen events.  The Lopes produced 205.5 team points to win the meet.

Success in the relay events has become normal for the Post ISD track program this season.  The group of Campbell Kirkpatrick, Alan Alaniz, Freddy Araiza and Bryan Smith ran for the gold in the mile (4 x 400 meter) relay.  Smith also ran in the sprint (4 x 100) relay and the 800 meter (4 x 200) races helping to win first and second places respectively.  Earlier in the day he put together discus and shot put throws to win both events.  At the end of the day, Smith was responsible for 34 team points.

Also running in the sprint and the 800 meter relays with Smith were Christen Pena, David Hernandez and Christian Perez.

The sibling rivalry between Campbell and Carson Kirkpatrick produced positive results for Post as the brothers combined for 37 points for the team.  Campbell outstretched Carson in the 110 meter hurdles for a first-second finish and a similar result in the 300 hurdles finishing second and third respectively.

Other outstanding performances by the Post JV boys were experienced throughout the day including and not limited to:  the 1-2-3 placement in the triple jump by David Hernandez, Ethan Self and Christen Pena; Dylan Pearson finished first in the long jump and second in the high jump; and in the pole vault, Paden Babb placed first clearing 10' 6" and Eric Gomez and Marco Erives came in 4th and 6th places.

Coach Riker added "the boys worked hard all year. We look forward to many more great years with these young men."

On a side note, although there was not a full team of JV girls, one young lady represented Post in that category at the district meet.  Rebecca Taylor, a 9th grader, competed in and placed first in both the discus and shot put  events. Congratualtions Rebecca.

(Click here to read the story about the PHS varsity teams' results.)