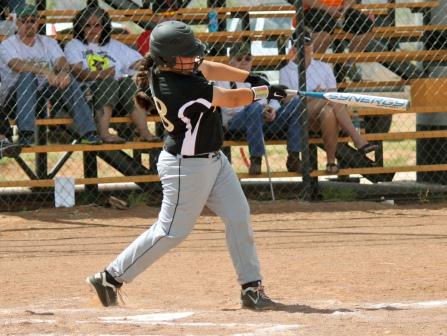 Rebecca Taylor rips a base hit.
(Click the above photo to see additional photos)

ACUFF - The Lady Lopes locked up fourth place in District 3-2A on April 17 winning at Lubbock Roosevelt High School, 15-5.

Senior Kari Dunn pitched her final win of her high school career against the Roosevelt Lady Eagles.  Her team provided a solid defense with just two errors and aggressive offense scoring in all five innings of the short game due to the 10 run mercy rule.  Dunn provided two hits herself, scoring three times and knocking in a run.

Left fielder Kelbie Oden was three-for-three at the plate, scoring twice and batted-in one run.

Both Alexis Ramirez and Rebecca Taylor got two hits for the L-Lopes.

On April 20, Post faced Colorado City, the leagues' top team, and lost 10-0 to end the season at C-City finishing with even win-loss records for the season and the league, 11-11 and 6-6.

Even though the Lady Lopes did not make the playoffs, Coach Toby Allen is optimistic about the team's future with losing just one senior.  He also noted that next year's District 3-2A line-up looks favorable for Post.  The small four team softball district for 2013 consists of Slaton, Roosevelt, Idalou and Post.  "We've beaten Roosevelt now 3 times (18-14, 22-19, 15-5) and Slaton twice (15-4, 17-2)," said Allen.