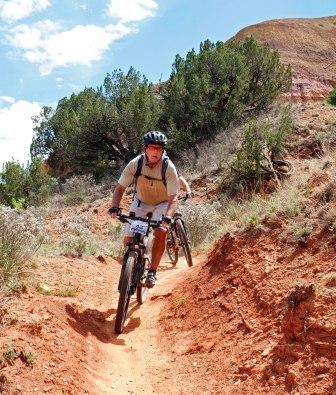 Former President George W. Bush leads the way along one of the many biking trails at Palo Duro Canyon State Park during the first day of the second-annual W100 Wounded Warrior mountain bike ride. The three-day ride event also features 20 U.S. servicemen and women who were wounded during battles in Iraq and Afghanistan.

The three-day Warrior 100K bike ride not only highlights the bravery and sacrifice of soldiers wounded in the global war on terror, but also provides a high-profile opportunity for disabled veterans from four leading military support programs to enjoy an extended weekend of riding and comradery with their former commander-in-chief.

aaThis marks the second W100 bike ride held in a Texas state park, as Bush—who is an avid and skilled mountain biker who frequently rode at his Texas ranch and at Camp David during his two-term presidency—hosted the first ever W100 last year at Big Bend Ranch State Park in far Southwest Texas.
For more information about the W100, contact State Parks Public Affairs Rep. Bryan Frazier at (512) 826-8703, or visit www.w100k.com.