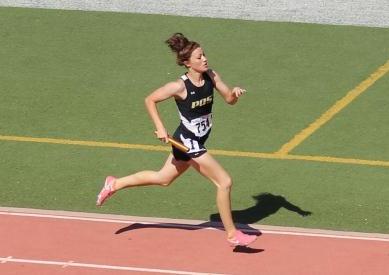 Haily Berry finishes the 4 x 400 meter relay for the Lady Lopes.
(Click the above photo to see additional photos)

ODESSA  - Three Post track and field athletes earned their way to the state meet scheduled for May 11 and 12 at the University of Texas in Austin.

Senior Corbin McDonald, junior Haily Berry and sophomore Alexis Ramirez had their personal best performances this past weekend at the Region 1 track and field meet at Odessa's Ratliff Stadium which qualified them for the state meet.  The top two finishers in each event at the regional meet advance to state.

Ramirez struck first for the Post team on Friday.  "Alexis shocked us all in the discus," said head track coach Beau Riker.  After her second throw of 117' she was in second place.  Just before her third and final attempt, the leader at the time was Brooke Daily from Abernathy who threw the discus 119 feet.  Alexis  immediately followed the with the best of her young career, 121'6".  Eyewitness Athletic Director Steve Smith said "it was awesome" seeing Alexis throw.  Her best at the previous meet which qualified her for the region contest was just 99'.  Ramirez finished in second place and a trip to Austin.  Amber Graham of Cisco won the event with a toss of 129'7".

Corbin McDonald not only achieved his personal best, he again re-set the PHS school record with a triple jump of 46' 2.75" on what could have been the final jump of his high school career.  Coach Riker told The Garza Post "Corbin had us all worried.  Going into his final jump he was in 5th place. Feeling the pressure he jumped his personal best on his last jump moving him into first place and the regional champion."  The jump surpassed the previous record by 2.25".

Haily Berry proved that Post would dominate the triple jump event as she won the girls division with a personal school record setting best.  "Haily was very calm under pressure getting out to the lead early on with her second jump," explained Coach Riker.  Berry became the regional champ with a jump of 37'5" which was a half-inch better than the previous best she jumped in the district meet at Denver City.

The Lady Lope's team score was 24 points which put them in a 9th place tie with Hico.  The Crane High School team won the meet with 76 points.

The boys division was won by Sonora with 92 team points.  The Antelopes tied for 12th place with district foe Denver City with 14 points each.

Post took twelve qualifiers to the regional meet and had high hopes to qualify for state in a few more events.  Riker explained "our boys relay teams were disqualified in the prelims due to bad hand-offs.  (Also,) Alexis, Haily, and Corbin fell a little short of their goals in shot put, long jump, and high jump (respectively)."