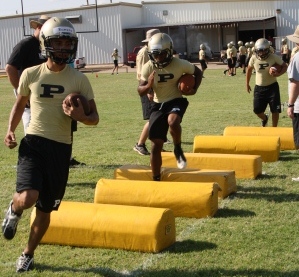 Post running backs train to step over defenders during two-a-day workouts.
(Click the above photo to see additional photos)

Friday concludes the first week of high school football workouts known as two-a-days.  The morning sessions concentrated on conditioning and the afternoons were on the field working on skills.

Because of UIL rules, the Antelopes won't have contact until Monday, just a few days before the match-up with their first opponent Brownfield for a scrimmage on August 17 at Jimmie Redman Memorial Stadium.

Second year Head Coach Steve Smith told The Garza Post that about 59 high school boys came out for the first week of practice.  That may be just a few short of having enough to field a freshmen team this year, which Smith was hoping to have.

As far as the condition of the athletes, he believes the kids are in "much better" shape compared to last summer which he attributes to the off season programs.

Predictions are futile and I don't have a crystal ball anyway, so I'll leave the future up to those who have a better grip on the big picture.

After being picked to finish the 2011 district season in fourth, the Bold Gold wound up in second to last (6th) in the former 2-2A district with a 1-5 record.  This year, according to Dave Campbell's Texas Football publication, the Lopes should complete the season in fifth just ahead of Tulia in the newly arranged District 2-2A, Division II.  The gridiron bible expects Abernathy to win the league followed by Lubbock Roosevelt, Olton, Floydada, Post and Tulia.

Local expectations are brighter for the 2012 Post varsity squad.  With 18 returning lettermen, ten of which were starters, Coach Smith thinks his team "will challenge for first or second."  The high school program as a whole has the ability to be exceptional as the freshmen players won all 17 of their games as a group in junior high.

This season's ten game schedule begins in Morton on August 31 and ends with preseason pick for district champ Abernathy at home on November 9.  Click here for a printable complete schedule.