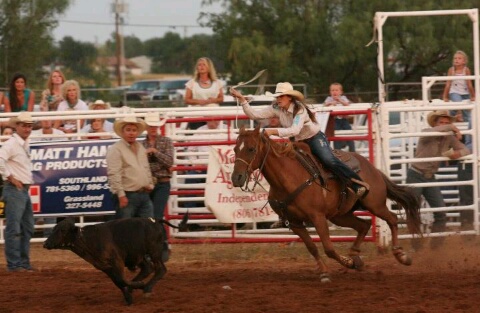 "We can't find two seats together" explained a Garza County couple as they looked over the standing room only crowd Saturday night at the 72nd Post Stampede Rodeo.

Stampede board member and organizer Lane Jones told The Garza Post that an estimated 3400 rodeo fans paid to attend the three day event.  Jones added that "it was the biggest rodeo since I started 13 years ago."

The largest crowd was on Saturday with a Stampede record of 1900 people.  Friday drew about 1000 and at Thursday's show 540 people contributed at the gate.  Jones pointed out that the figures don't include the kids who were allowed in at no charge.

Another record for the Stampede organization was the number of rough stock entries.  The Texas Cowboy Rodeo Association/United Professional Rodeo Association event distributed $32,000 in prize money over the weekend.

A couple of young Garza County ropers impressed the masses and were able to take home some prize money themselves.  Matti Smith placed second in the Breakaway Roping event winning $639.  And Aaron Macy found success twice with partners Wesley Wright and Wesley Thorp winning the third and fifth spots respectively for a total of $1327.

With his Post winnings, Macy is Texas' top prize winning header in the Team Roping event and is in contention for the TCRA rookie of the year.

Noticeable improvements were evident on the Post Stampede Rodeo grounds including the new concession stands and entrance gates.

Lane Jones explained that the next upgrade to the facility may be stadium style lighting which would eliminate the telephone poles and above ground wiring.  "That project could take a couple of years."

"I thank all the sponsors and people who made this another great event," said Jones.