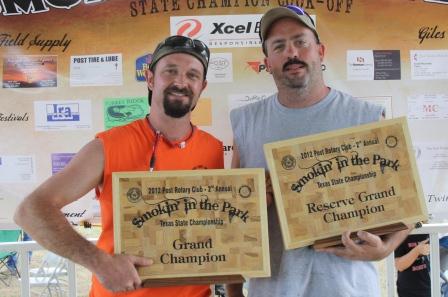 Brendan Locker (left) of Graham, Texas was the Grand Champion and Chris Eaves of Iowa Park the Reserve Grand Champion of the 2nd Annual "Smokin' in the Park" BBQ cook off hosted by the Post Rotary Club.
(Click the above photo to see additional photos)

The Post City Park was full of 49 cookers last weekend to compete in the 2nd Annual "Smokin' in the Park" state championship barbeque cook off.  "I believe the event went great and was even bigger than expected," commented Post Rotary Club president and event organizer Kerry Dixon about the 46 full teams of cookers.

By late afternoon Saturday, the beef, pork ribs, chicken and beans had been seasoned, smoked and judged bringing the event to a very successful end.   Dixon added "it brought a lot of people to town and I hope to make it bigger next year."

The first event in September 2011 attracted 19 cooking teams.  The 2012 cook off was upgraded earlier in the year when it was proclaimed a Texas state championship sanctioned event.

Rotary treasurer Dave Tyler told The Garza Post that the total prize money awarded was $5835:  $1125 was given in each of the brisket, ribs and chicken categories to the top five finalists, the beans category had three cash winners totaling $255 and the calcutta paid out $1455.

The participants started arriving Friday morning and that evening the Rotary Club sold over 200 chopped brisket sandwich meals to the public.  Later local country-rock band Vance Guthrie and Junction 84 took the stage and played until 11:30 p.m.

By all aspects, the Lonestar Barbecue Society sanctioned State Championship "Smokin' in the Park" cook off was a success.  "None of this could have been possible without the support of all of our great sponsors from the community," expressed Dixon.  The sponsors contributed $5800 to the event.