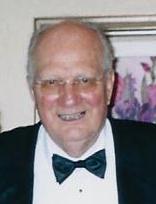 Mass for Dr. Bell will be at 11 a.m. Saturday, Sept. 1, 2012 at Holy Cross Catholic Church, Post with a Memorial Service at 2 p.m. at the Post First United Methodist Church.  Family visitation is Friday, 6 to 8 p.m. at Hudman Funeral Home.  Final resting place will be Christ in the Desert Monastery, Abiquiu, New Mexico.

He was born March 26, 1933 in Hale Center, TX.  He attended McMurry College and Perkins School of Theology; and was ordained as a Methodist minister in Lubbock in 1958.  In May, 1988, Bell completed his studies toward a Doctor of Ministry degree at Notre Dame University.

Dr. Bell served churches at Blackwell and Morgan Mill before serving with the Board of Missions of the Methodist Church.  From 1959-1969 he was a missionary pastor at Methodist Blackfeet Mission in Browning, Montana.  He was a volunteer staff member from 1969-1983 with the Ecumenical Institute, a Global organization concerned with the Human Factor in Rural Development.

During his time with the Ecumenical Institute, he served on the Sioux Indian Reservation, Cannon Ball, North Dakota; in the Republic of South Korea, Jeju Island and Chung Chong; and in Taiwan, Republic of China.  He also served in the Republic of the Philippines; in Hong Kong; in the Maharastra State of India; in Kenya; and in Nigeria.

Dr. Bell served as Associate Pastor at FUMC Midland and was pastor at Post, Muleshoe and Clarendon. He was Chairman of Mission Committee, Northwest Conference from 1999-2003.  He was a member of the Post Rotary Club, the Lubbock Chorale, and performed many times on the stage of the Garza Theatre.  He also served as Garza County Democratic Party Chair.  James was a St. Benedictine Oblate.

He was a member of the Post Rotary Club, the Lubbock Chorale and served as Garza County Democratic Party Chair.  James was also a St. Benedictine Oblate.

He was preceded in death by a son, Timothy; parents Cecil and Lillie Bell; a brother, Charlie Bell; and two sisters Joyce Teague and Bernice Schmidt.