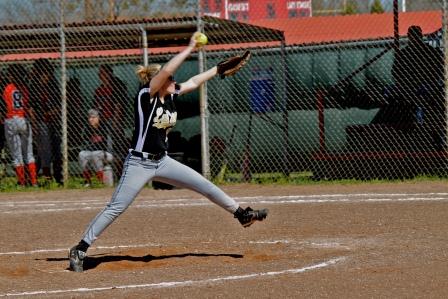 Kari Dunn keeps Anson off balance in a Lady Lope win.
(Click the above photo to see additional photos)

SWEETWATER - The Lady Lopes split four games at the Jerry Collins Complex in the Sweetwater  Softball Tournament this past weekend.   The girls squeezed in four games over two days winning the middle two against Winters and Anson while loosing the first and last games by being shutout by Hawley and Merkel.

In the consolation game, Post lost 16-0 to Merkel and to start the tourney the L-Lopes were defeated by Hawley in their first game by the same score.  "Overall, in the tournament, we gave up way too many errors," said first year head coach Toby Allen.

In the other two games the Post girls prevailed with wins against Winters 13-3 and Anson 10-5.  "We hit the ball well, but we've definitely got room to improve offensively." added Allen.  Leading Post at the plate were Callie Odom and Sara Greer.  Odom was 5 for 9 with a homerun and 6 runs batted in.  Greer was 4 for 8 with two doubles and crossed the plate four times.