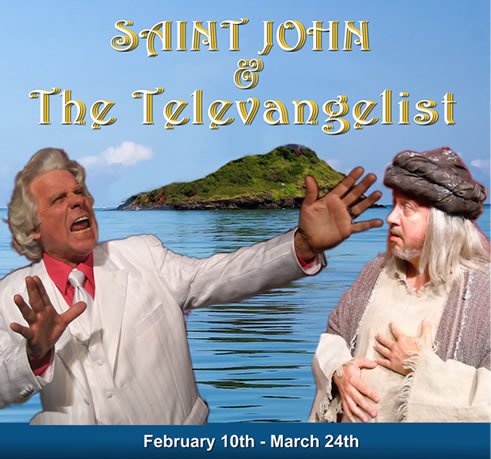 Do you remember when Dolly Parton took over for Pretty Miss Norma Jean, or when Don Knotts first put on his deputy uniform? How about Elvis with his hair slicked back in ducktails and his collar turned up on the Ed Sullivan Show?

Years from now there will be people who boast about being there when The Reverend Joey Hallelujah first burst onto the stage at Ragtown Gospel Theater. It will be an experience those who attend will never forget.

The founder of The Reverend Joey Hallelujah Worldwide Crusades, author of 16 national bestsellers, and the standard by which all other televangelists will forevermore be measured stars in the 7 week premier of SAINT JOHN  & THE TELEVANGELIST at Ragtown Gospel Theater in historic Post, Texas.  The play that chronicles The Reverend Joey Hallelujah's miraculous encounter with the Apostle John on the Isle of Patmos is a comedy written by Chip Polk and directed by Glenn Polk.

This is the 18th production staged at Ragtown believed to be the most thoroughly entertaining play to date. But as hilarious as SAINT JOHN & THE TELEVANGELIST is, there is a very profound, very important message...one which the Apostle John gives Joey Hallelujah to deliver after he departs from Patmos. It is a message present day Christians need to hear.

The Ragtown Gospel Band  perform before the new play with a  big homecoming style show.  Chip Polk's vocal and piano virtuosity is being taken to an exciting new level with the addition of a seven member group, which includes not only backup singers, but several powerful solo performers and gifted instrumentalists.