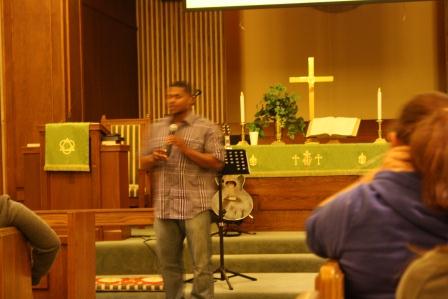 It was a night to remember for all in attendance last Wednesday night, February 1, at Post’s First United Methodist Church.  Professional football Baron Batch, who is currently with the Pittsburgh Steelers, played his college ball at Texas Tech and hails from Midland, Texas.  The 24 year old athlete came to share his story with the junior high and high school Post Community Youth Groups.

Baron was the famous person in the room.  Everyone wanted to meet him, to greet him, to tell him something about them, become Baron’s friend though exactly what that means might be up for interpretation.

Most people react to being famous in one of two ways.  Some drink it in seek out the spotlight and make everything center around their own egos.  Others withdraw, become silent, obviously wish that everyone would just let them alone, and they often come off as being “too good for the rest of us.”  Baron did neither of these things.  He listened, answered every question, shared himself with us but did not have “I” disease.  Later, he willingly signed every autograph and made the people around him a priority.  That’s class.

Baron’s central theme was placing your trust in God.  He spoke of things that are common to all of us.  He began with his own struggle with a sense of entitlement and how he had to give that up.  He spoke of how hard it was to let “things” go even when it was necessary to pursuing a career in the NFL. Long before professional aspirations, he said that he played on the "C" team as a freshman in high school.  Even at such a young age, he obviously displayed a special character and perseverance.  Baron candidly related his struggles; physical, spiritual and emotional, when he was injured.  And Baron shared with us how he had to grow out of questioning God and into truly putting his trust in God in every situation.  Instead of asking God “why” Baron learned to simply believe that God was going to use this situation.

One of the things that the kids themselves picked up on quickly was Baron tries to live out his life according to particular scripture that he has chosen to be his “life verse.”  Baron’s is “Whatever you do, work at it with all your heart, as working for the Lord, not for men.” (Colossians 3:23)  In listening to Baron speak and share his heart you could hear him striving to live out that verse in his own life.  Baron’s desire to serve God in every situation, both good and bad, showed through.   He encouraged all to choose a "life verse" and to live by it.

When Baron’s talk was over he opened the floor to questions and answers.  One of those questions arose about an article that had been printed in regional newspapers titled “When Ripples Collide.”  Baron spoke of how a man had come to him and said, “Thank you for saving my life.”  Baron could not remember this man so he asked what he had done to save his life.  It turns out that the man had decided to kill himself.  He didn’t want to make a mess for anyone so he had laid out newspapers on the floors and across his desk so everything could be cleaned up easily.  As he placed a gun to his head an article in one of the newspapers on the desk caught the man’s eye.  It was an article Baron had written.  In the article Baron spoke of how you just can’t quit.  You have to keep going and keep trying.  After reading the article the man chose not to quit and put down his gun.

After having answered questions, the service ended with offering prayer for anyone who desired to pray and most of the youth came forward either to ask prayer for themselves or to pray over their friends.  At least one child asked for salvation.  Others recommitted themselves.  Others prayed for their families.

Afterwards, Baron stayed another hour and a half in the fellowship hall signing t-shirts, books, pictures, footballs, and anything simple slips of paper and freely speaking with any and all who desired to speak with him.

The only bad thing is that now these old Cowboys fans will have to yell for the Pittsburgh Steelers as long as Baron is on the team.

For more about Baron, go to BaronBatch.com or Google search Baron Batch.