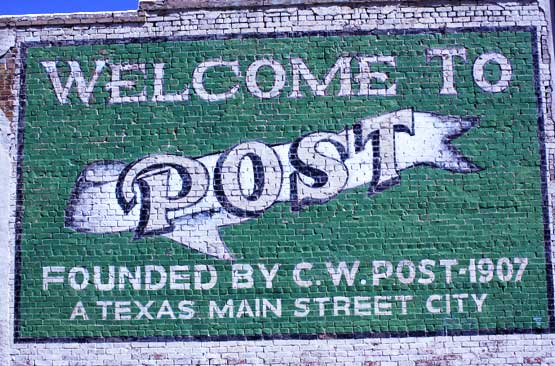 The Post City Council held a regular council meeting on Tuesday, January 10 at 5:30 pm.  After opening ceremonies, the meeting was called to order at 5:33 pm.

The first item on the meeting agenda was the approval of consent agenda including the minutes from the previous regular meeting and approval of invoices for January.

The second item addressed the progress of negotiations on the White River Municipal Water District contract.  The cities involved in the contract include Ralls, Spur, Crosbyton, and Post.  Progress on the contract was delayed when Spur chose not to participate with the other cities in using a common law firm for representation because of concern about cost.  With approval from Mayor Harp, the City of Post will pay for Spur's portion of the legal bills to date, which was estimated at approximately $200.  With the "log jam" broken, City Attorney Slater Ezra indicated progress would continue and the council would likely have something to review by the next month's meeting.

Next the council discussed options for ongoing operations of the Post/Garza County EMS.  Work is in progress to update and formalize the local EMS business entity.  At this point a new entity has been created, a new employee identification number (EIN) secured, and filing for 501(c)3 non-profit status is in progress.  To help ensure Medicare and insurance processing as well as allow time for the accounting and legal work to continue, the council agreed to continue to support the Post/Garza County EMS by allowing the group to continue filing with Medicare using the City EIN while completing their reorganization.  A report will be provided again with the next regular meeting and no formal action was taken.

The status of the Garza Theatre building was discussed and City Manager Arbie Taylor sought approval to proceed with engaging structural engineers and related experts to get estimates on repairing roof problems.  These repairs would be required to ensure the safety of subsequent work on the building.  Council agreed for Taylor to proceed with estimates which will then be brought before the City Council for review before determination of next steps.

The council then discussed the potential sale of surplus equipment owned by the city.  After discussion the council agreed for the City Manager to make a list of equipment and begin steps for sale. The City Attorney noted that this was also the first step for the city to be able to dispose of or give away those items which could not be sold but are of no use to the city.

The next agenda item was the potential approval of the purchase of new vehicles for the City fleet.  Taylor suggested the purchase of two large Ford F750 trucks to replace trucks that are no longer in working order.  These trucks were estimated at $74,900 and $82,000 respectively, with differing styles of flatbeds leading to the cost difference.  He also recommended the purchase of a new Ford F150 at an approximate cost of $22,400.  This truck would be placed in the staff fleet and allow the removal of another truck in very poor condition to avoid repairs that have "diminishing returns.”  Taylor noted that these vehicles would be purchased out of the new capital replacement fund which currently has well over $750,000 dollars with more expected.  He also stated that the fund "is working" and the city needed to begin using it.  The council voted to approve the purchase of one of the flatbed F750 trucks and the F150 truck, with the possibility of reviewing the purchase of the second flatbed at a later date.

Next was discussion, at the request of Mayor Harp, of the possibility of establishing a computer policy for the city to avoid any potential problems stemming from misuse by employees or other events.  City Secretary Deana Watson obtained example policies from various cities.  A policy from Ransom Canyon was found to be concise and most applicable to the needs of our City.  City Manager Taylor explained the current IT services that are in place and the City Attorney explained how the policy might help the City in legal areas.  The council approved putting the new policy in place as a part of the existing employee policy, with details regarding audits to be addressed at the next meeting.

The council approved the move of the February meeting to Thursday, February 23rd at 5:30pm.  Due to schedule conflicts, more of the upcoming monthly meetings may need to be moved and will be handled one at a time.

During time set aside for comments from citizens, the City Manager, and City Officials Mayor Harp congratulated City Manager Taylor on his recent Credentialed Manager designation from the International City/County Management Association.