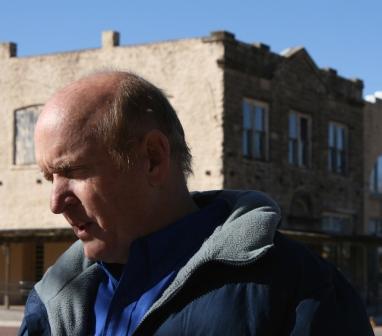 Republican presidential candidate John Davis made a stop in Post earlier this week bringing his message to voters one-on-one.

While other Republican presidential candidates were debating each other and preparing for the Florida primary, John Davis is quietly making a bus tour across the United States.  “We don’t get any attention from the national media,” the candidate said during his visit to Post Monday, January 23.  “We do have the opportunity to talk with folks one-on-one.  Our Votercade gives people a chance to get to know what kind of man I am.”

Davis’ presidential campaign is reminiscent of the “whistle stop” style of campaigning used by candidates long before Twitter, Facebook and CNN.  This candidate, along with his wife and two drivers, plans to visit all 3143 counties in the United States.  As of Monday, the troupe had been to 1825 counties.  “Voters need to know the man they are going to put in the White House,” Davis said.  “I’m out meeting people and finding out what their concerns are.”

When asked what his greatest challenge is, Davis explained, “ Some days it is hard because people in our country are having a tough time and it can be depressing to hear their stories.  And, we get tired.  These are long days.  We start early and stay with it until late.”

“We can’t continue to give out freebies,” Davis said.  “We need to give out food staples so folks can go home and make their food.  If we do this instead of food stamps, then there is nothing to sell for drugs.  We need to be smart about what we do.”

The builder/developer from Grand Junction, Colorado certainly faces an uphill battle.  You can’t win your party’s nomination if your name isn’t on the primary ballot.  Davis was on the ballot in New Hampshire and will be in Nevada in February.  For now, that’s it.   “We hope to get on the ballot in Texas,” he said.  “But it costs $5000.”

As the large, colorful John Davis campaign bus headed east on its way to Jayton  and then on to Aspermont and points beyond, one could only wonder how different the presidential primary race would be if all candidates used this style of campaigning.

Before posting this story tonight, I checked Davis’ blog.  The headline reads:  “Bus is on time to Greenville, MS.”  And so, the “Davis for President” Votercade makes its way toward Florida.