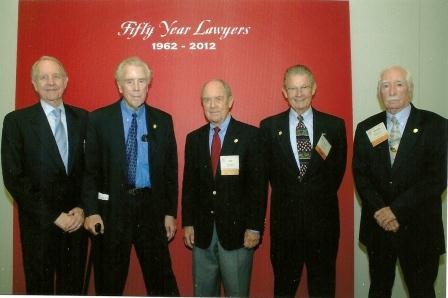 At the convention, Poole was recognized for his 50 years of membership in the organization which supports the administration of the legal system across the state.

He started his career after earning his law degree from the University of Houston in 1962.  At this year's gathering, Poole was joined by four other '62 U-of-H classmates: Daniel Snooks, William Morse, Jr., Joe S. Maida III and James Knox.  The two day event was hosted by the Hilton Americas Hotel in downtown Houston.

Thirty years of his half century of service was in the position of Garza County Attorney.  During that time, Poole also served as Special Prosecutor for Lubbock County under Criminal District Attorney Travis Ware.

Prior to attending law school, Preston graduated from North Texas University in Denton with honors and a Bachelors of Business Adminstration degree.

While he pursued his law degree during night school at Houston, Poole worked for Shell Oil in Deer Park.

Poole excelled academically in law school being awarded the St. John Garwood award twice for achieving the highest grade in a class and he received the American Juris Prudence award.