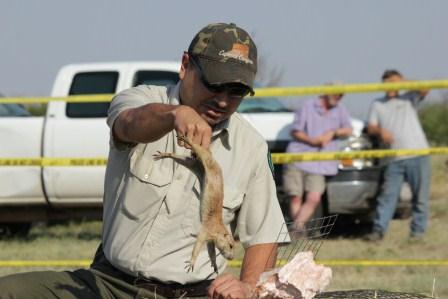 Caprock Canyons State Park ranger James Ortiz prepares to release one of 29 Black-tailed prairie dogs inside the park as part of the prairie habitat restoration going on at the 15,000-acre park located in the Texas Panhandle.

And much like the pioneer predecessors who arrived hundreds of years before, the residents of this new unincorporated settlement arrived with little fanfare, minimal provisions, and will build meager, basic living accommodations for their families. Likewise, they come seeking only a new frontier of freedom and embody a primal spirit of survival.

On June 28, 29 Black-tailed Prairie Dogs were reintroduced to Caprock Canyons State Park’s Honey Flat area as part of a prairie restoration project to return the park’s landscape and wildlife back to its appearance prior to European settlement.

“This is the latest phase in our attempts to restore this prairie ecosystem,” said Donald Beard, Caprock Canyons State Park superintendent. “Restoring the Texas State Bison Herd into the park will probably always be the flagship of our effort, but our plans also include bringing back other animals and native plants to make the land more complete. Adding a prairie dog town is one more part of that, and it will add another popular wildlife viewing opportunity for park visitors.”

These transplanted animals were donated by Lynda Watson, a private prairie dog advocate and relocation specialist from nearby Lubbock, who had held the animals in a three-week quarantine before being released into the park. In preparation for their arrival, park staff pre-drilled several holes to encourage the animals to begin making their dens. Bottomless cages filled with hay and food were placed over some of the holes to provide temporary shelter and protection from predators.

Black-tailed Prairie Dogs are an indigenous, keystone species to the Texas Panhandle, but once upon a time, they were hunted, even exterminated to reduce competition for cattle and other livestock. However, recent decades have brought to light information that has begun to change public perception—that prairie dogs can actually play a useful role in the fragile prairie ecology. Grazing by prairie dogs decreases annual and non-native vegetation, such as mesquite trees, while at the same time increasing beneficial perennial grasses such as buffalo grass and blue grama.

Typically, prairie dogs settle in large family groups—called towns—with a labyrinth of interconnected burrows and holes, and also benefit numerous other native species such as Burrowing Owls, Black-footed Ferrets, Ferruginous Hawks and Swift Foxes. A few hundred years ago, these oversized ground squirrels roamed some 700 million acres across the Great Plains of North America with a population estimated to be more than 5 billion animals.
The transplanted prairie dogs at Caprock Canyons will be confined within the interior of the 15,000-acre nature preserve to prevent the animals from leaving the park borders.  Environmental boundaries such as heavy brush, steep canyon cliffs and natural funnels along with constant monitoring and population management practices will assist park staff in containing the town within the 200-acre defined habitat enclosure.

“Another part of having prairie dogs on site here in the park is for education for the visiting public,” Beard added. “Although prairie dogs can compete with cattle and livestock, it has been found that in healthy pastures, there is sufficient forage available cattle and dogs, even under heavy grazing pressure.”