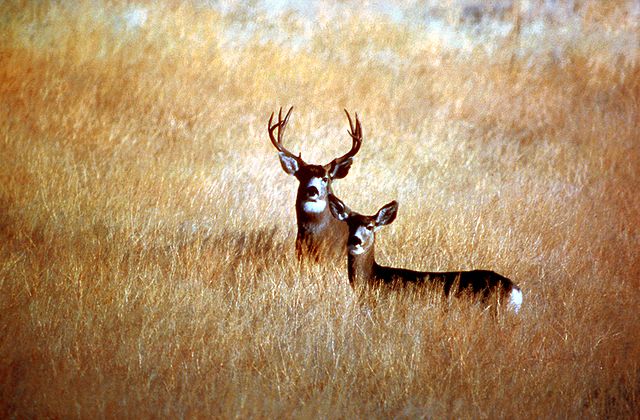 AUSTIN -- Samples from two mule deer recently taken in far West Texas have been confirmed positive for Chronic Wasting Disease (CWD). These are the first cases of CWD detected in Texas deer. Wildlife officials believe the event is currently isolated in a remote part of the state near the New Mexico border.

The Texas Parks and Wildlife Department (TPWD) and the Texas Animal Health Commission (TAHC) implemented regionally-focused deer sample collection efforts after the disease was detected in the Hueco Mountains of New Mexico during the 2011-12 hunting season. With the assistance of cooperating landowners, TPWD, TAHC, and USDA-APHIS-Wildlife Services biologists and veterinarians collected samples from 31 mule deer as part of a strategic CWD surveillance plan designed to determine the geographic extent of New Mexico’s findings.  Both infected deer were taken from the Hueco Mountains of northern El Paso and Hudspeth counties.

CWD is a member of the group of diseases called transmissible spongiform encephalopathies (TSEs). Other diseases in this group include scrapie in sheep, bovine spongiform encephalopathy (BSE or mad cow disease) in cattle, and Cruetzfeldt-Jakob disease in humans. CWD among cervids is a progressive, fatal disease that commonly results in altered behavior as a result of microscopic changes made to the brain of affected animals. An animal may carry the disease for years without outward indication, but in the latter stages, signs may include listlessness, lowering of the head, weight loss, repetitive walking in set patterns, and a lack of responsiveness. CWD is not known to affect humans.

Tissue samples were initially tested by the Texas Veterinary Medical Diagnostic Laboratory in College Station, with confirmation by the National Veterinary Services Laboratory in Ames, Iowa.

"Now that we have detected CWD in Texas, our primary objective is to contain this disease,” said Carter Smith, TPWD Executive Director. “Working collaboratively with experts in the field we have developed protocols to address CWD and implementation is already under way."

There is no vaccine or cure for CWD, but steps have been taken to minimize the risk of the disease spreading from beyond the area where it currently exists. For example, human-induced movements of wild or captive deer, elk, or other susceptible species will be restricted and mandatory hunter check stations will be established.

"This is obviously an unfortunate and rather significant development,” said TPW Commission Chairman, T. Dan Friedkin. “We take the presence of this disease very seriously and have a plan of action to deal with it. The Department will do whatever is prudent and reasonable to protect the state’s deer resources and our hunting heritage."

Although wildlife officials cannot say how long the disease has been present in Texas or if it occurs in other areas of the state, they have had an active CWD surveillance program for more than a decade.

"We have tested more than 26,500 wild deer in Texas since 2002, and the captive-deer industry has submitted more than 7,400 CWD test results as well,” said Mitch Lockwood, Big Game Program Director with TPWD. “But that part of West Texas is the toughest place to conduct an adequate CWD surveillance program because so few deer are harvested out there each hunting season. Thanks to the cooperation and active participation of several landowners, we were able to begin getting an idea of the prevalence and geographic distribution of the disease without needing to remove many deer."

The TAHC regulates cervid species not indigenous to Texas such as elk, red deer, and sika deer. TAHC oversees a voluntary CWD herd monitoring status program with the intent to facilitate trade and marketability for interested cervid producers in Texas. Cervid herds under either TPWD or TAHC authority may participate in the commission’s monitored CWD program. The basis of the program is that enrolled cervid producers must provide an annual herd inventory, and ensure that all mortalities during the previous year were tested for CWD and the disease was not detected.

Wildlife biologists, hunters, and landowners would certainly have preferred for Texas mule deer populations to have not been dealt this challenge, but TPWD and TAHC have developed a CWD Management Plan that includes management practices intended to contain the disease.  The management plan includes input from the CWD Task Force, which is comprised of deer and elk producers, wildlife biologists, veterinarians and other animal-health experts from TPWD, Texas Animal Health Commission, Department of State Health Services, Texas A&M College of Veterinary Medicine, and USDA.

The disease was first recognized in 1967 in captive mule deer in Colorado. CWD has also been documented in captive and/or free-ranging deer in 19 states and 2 Canadian provinces, including neighboring New Mexico.

"We know that elk in southern New Mexico are also infected with CWD,” said Dr. Dee Ellis, State Veterinarian and TAHC Executive Director. “It will take a cooperative effort between hunters, the cervid industry, and state/federal animal health and wildlife agencies to ensure we keep this disease confined to southern New Mexico and far West Texas. I am confident however that will be able to do that, and thus protect the rest of the Texas cervid industry."

More information on CWD can be found on TPWD’s website, www.tpwd.state.tx.us/CWD or at the Chronic Wasting Disease Alliance website, www.cwd-info.org.

More information about the TAHC CWD herd monitoring status program may be found at https://tahc.state.tx.us/animal_health/cwd/cwd.html.