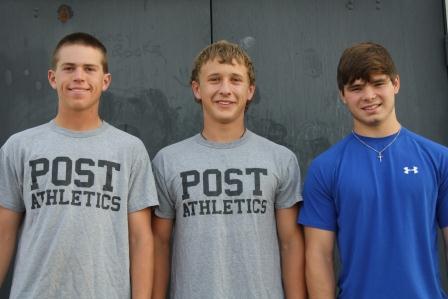 The recognition comes after underclassmen Vance Blair, Campbell Kirkpatrick and Pake Jones were placed on the 3-2A All-District list in May.

Junior Vance Blair was chosen as the second team shortstop.  He produced a .353 batting average and a 50% on base percentage during the district season.  Blair also showed his speed with 16 stolen bases on 16 attempts.

The district Newcomer of the Year, sophomore Campbell Kirkpatrick, was one of three All-South Plains outfielders.  He played in all twelve district games getting a hit in each.  Kirkpatrick had the most tries at the plate with 40 and finished the district season with a .300 average.  He also had success on the base path with six stolen bases.

Pake Jones, a sophomore, was named as a utility player for his time on the mound and behind the plate.  He pitched a total of 20 innings and the remainder of his time was catching for the other pitchers.  At the plate, he averaged .385, the teams highest average, while recording 13 RBIs, 10 runs on 15 hits including a home run and six steals.