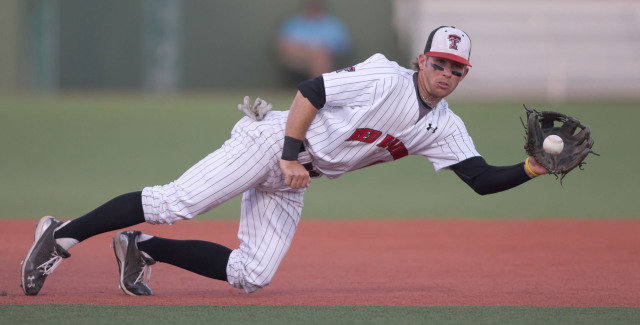 Post native Reid Redman's name was announced on Wednesday, June 6 in the 23rd round of the 2012 Major League Baseball First-Year Players Draft.   He was chosen by the Tampa Bay Rays.  "Its a dream come true.  To get the opportunity to play professional baseball is a blessing," Redman told The Garza Post.

Reid, a 6'1" senior infielder for Texas Tech, is the son of Dale and Penny Redman of Midland and the grandson of Delores and the late Jimmie Redman of Post.   "I am so proud of Reid.  He has worked hard and had lots of fun in his baseball career," said his grandmother Delores.

Reid lived in Post until he was six years old.  His family moved to Snyder before relocating to Midland where he attended Midland Christian High School where his father Dale was his baseball coach.  Reid played two years at Midland College before transferring to Baylor where he sat out a year.  He then transferred to play his final two years of eligibility of collegiate ball at Texas Tech where he majored in energy commerce.

His father Dale played a little ball himself.  He was a four-year letter winner in the Red Raider baseball program from 1981-84 and finished his career batting .324 in 1984 according to the TexasTech.com.

"I saw early in the season last year that he could play at another level," said Delores.  And so did the pro scouts.  Last year Reid was a 37th round MLB draft pick by the Los Angeles Dodgers but he chose to stay at Texas Tech to play his senior season.   This week's selection made him the fifth player in Texas Tech history to be drafted in back-to-back drafts.

Reid, who hit .325 with a .383 on base percentage in 2012, was picked by Tampa Bay mostly for his defensive skills as noted on RaysColoredGlasses.com.

Reid is reporting for duty with the Tampa Bay Rays baseball club on Monday, June 11.  "I'm here for a week for a post draft camp and then leave for Princeton, West Virginia to play in the Appalachian League," said Redman.

He added "I spent an hour or two after the draft just thinking about all of my years of playing and how far I've come. I thought about how I've been blessed to be surrounded by all of the friends and family who have made it possible for me to live this dream. And also about my granddad (Jimmie) and the joy that he must feel in heaven and how he'll be watching over me every step of the way and watching every game from up above."