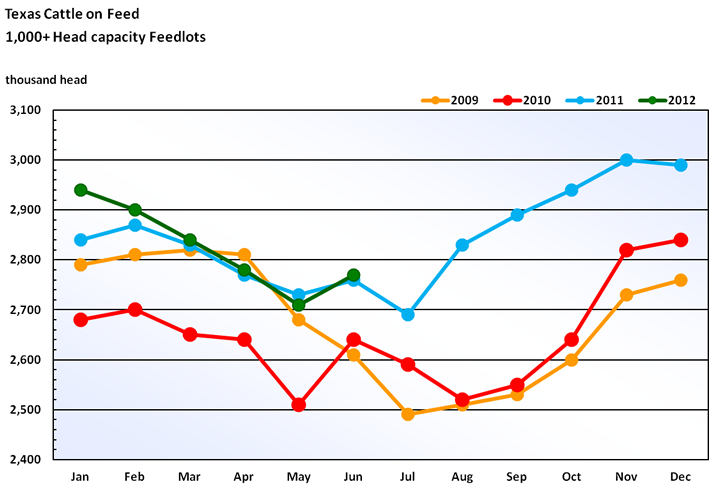 Cattle on Feed Up Slightly

Cattle and calves on feed for slaughter market in Texas feedlots with capacity of 1,000 head or more totaled 2.77 million head on June 1, up slightly from a year ago. According to the monthly report released by the Texas Field Office, the estimate was up 2 percent from the May 1 level. Producers placed 580 thousand head in commercial feedlots during May, up 4 percent from a year ago, and up 41 percent from the April 2012 total.

On June 1, there were 2.39 million head of cattle and calves on feed in the Northern High Plains, 86 percent of the state’s total. The number on feed across the area was up 2 percent from last year and up 3 percent from the May total.

Cattle and calves on feed for slaughter market in the United States in feedlots with a capacity of 1,000 head or more totaled 11.1 million head on June 1, 2012. This inventory was 2 percent above June 1, 2011.

NASS provides accurate, timely, useful and objective statistics in service to U.S. agriculture. The Agency invites you to express your thoughts and provide occasional feedback on our products and services by joining a data user community. To join, sign in by clicking here and look for “NASS Data User Community.”