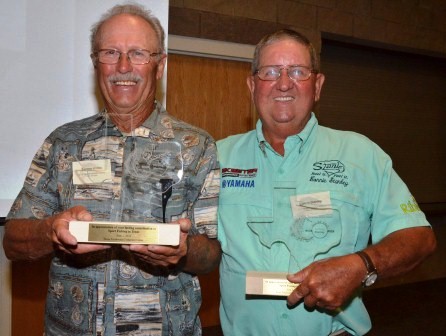 Tommy Martin (left) and Lonnie Stanley were inducted into the Texas Freshwater Fishing Hall of Fame in Athens, Texas on June 2.

ATHENS, TEXAS — Anglers Tommy Martin and Lonnie Stanley were inducted into the Texas Freshwater Fishing Hall of Fame at a banquet in Athens Saturday night.

Martin, of Hemphill, and Stanley, of Huntington, were joined by about 100 friends and family as they received their awards and viewed videos recapping their careers.

The two were the twenty-third and twenty-fourth inductees into the Texas Freshwater Fishing Hall of Fame, which was established in 1996 and inducted its first honorees in 1997. The purpose of the Hall of Fame is to recognize and honor those who have made a lasting contribution to freshwater fishing in Texas, and to foster a sense of appreciation, awareness and participation in the sport of fishing.