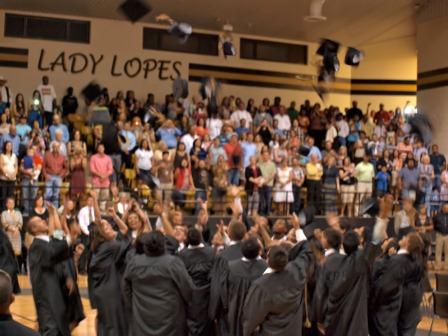 The Class of 2012 close the graduation ceremony with the traditional tossing of the caps Friday, June 1 at the Antelope Arena.
(Click the above photo to see additional photos)

The Antelope Arena was the sight of the Post Independent School District’s commencement ceremony on Friday, June 1.

Forty-six high school seniors completed thirteen years of public school education by receiving their high school diploma and as is displayed on the evenings program they are now "ready to make tracks".

In addition to the well composed and presented words of reflection and encouragement from Valedictorian Kari Lanae Dunn and Salutatorian Kambry Pearl Mason, class Historian Shirley Marie Araiza delivered a comprehensive and humorous review of the class members' time together.  All three young ladies are honor students and members of the National Honor Society.

During the evening special attention was directed toward remembering Paulina Hernandez who suddenly passed away May 25, 2011 at the age of 17.  She was a member of the 2012 class.

This year’s Post ISD Memorial Scholarship was given to Amanda Duran in Paulina's memory by Superintendent Mike Comeaux.

After being in business for less than a year, The Garza Post (garzapost.com), gave its first award to Fabian Torres who strives to be a graphic artist.  TGP Partner Cody Collier had the honor of presenting the $500 gift to Torres.

Post Sports Radio owner Jim Plummer presented the businesses’ first scholarship to Parker Loftus who plans on attending a junior college before transferring to a four year institution and is considering becoming a dentist.

Principal John Berry announced the names of the graduates one by one and as they crossed the stage school board President Mike Holly handed them their diploma.

Skylar Jones opened the event with the invocation and Dakota McDonald gave the benediction prior to the tossing of the graduation caps which ended the groups final gathering together.

Click here to see the grads on the PHS Class of 2012 page.

Click here to see the grads on the PHS Class of 2012 page.