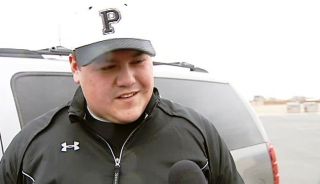 Post ISD athletic trainer Art Maestas was in the right place at the right time, in Lubbock.

KCBD Newschannel 11 has been conducting a good Samaritan promotion for the past few months where they give $300 to at random person who in-turn pays it forward to a person in need.  The recipient cannot be a family member.

When asked who he'd like to give the money to, Maestas immediately asked host Carry Allen if they could make a road trip to Post.  Allen obliged and they were off to award the cash to Craig Bigham.

Allen told The Garza Post "this is the second time we have ended up traveling outside of Lubbock."  The other was to Levelland in December.

When Maestas, Allen and the cameraman arrived at the Post Middle School gym, Art phoned Craig Bigham and asked him to meet outside.  Bigham, father of Brynne Bigham, had a pleasantly surprised reaction to Maestas's generosity.  Allen said "(Maestas') biggest concern was that he would embarrass Craig by putting him on the spot while on TV."  He added that Maestas commented during the drive here "that it was worth it and that it felt good to help a friend out."

Many in Post are familiar with the Bigham family story, but not everyone in Lubbock is as aware.  Not until KCBD's Cary Allen put the story on TV.  Allen explained "I did not know the entire story surrounding Craig Bigham and his daughter's journey until I returned to Lubbock later that day and logged onto his website. I was deeply touched and I know that our staff was deeply touched too.  Viewer response has been very positive too.  We posted a link to Brynne's Smiles on our website and encouraged residents of the South Plains to donate or help out if they felt led to do so.  There were Facebook comments saying that people were praying for Brynne and the Bigham Family."

Allen concluded "I only met Craig for a few minutes, but I can tell that he is a very good man and that he cares about other people very much.  On a personal level, I will be praying for Craig and his family too."

See the KCBD "Pay it Forward" video and story by clicking here.  The segment aired on Monday, March 12.