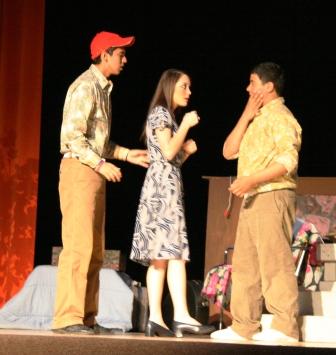 PHS students who participated in the One Act Play Zone competition on March 22 are (from left): Stephen Rodriguez, Kelsey Isbell and Jordan Barbosa. Rodriguez was named Best Actor of the competition and Kelsey Isbell received Honorable Mention All-Star Cast recognition.
(Click the above photo to see additional photos)

Results at the Zone One Act Play contest Thursday, March 22 were somewhat disappointing for the Post One Act Play participants.  PHS' performance of "The Shadow Box" was chosen as Alternate Play with Denver City and Ralls advancing to the District Contest, April 5 in Post.  Several PHS students were honored for oustanding performances: Stephen Rodriguez was named Best Actor; Steven Howard was named to the All-Star Cast and 3 actors received Honorable Mention All-Star Cast:  Shirley Araiza, Kelsey Isbell and Andi Soliz.

Director Leslie Tatum told the Garza Post during dress rehearsals, "We are in a tough zone.  All four [of the participating schools] are really good."  Leslie's husband, Tim and daughter, Laurel, share directorial responsibilities.  After the Zone contest, Leslie said in an email, "We were definitely disappointed...but we are so proud of the kids and how well they have performed this year."

The PHS cast performing "The Shadow Box" by Michael Cristofer, has been preparing since casting was completed in mid-November, 2011.  "We took Christmas off, but we told the kids to have their lines memorized when we came back after the holidays,"  Tatum continued.  "And they did."  The cast was also given a rest for Spring Break except for one special rehearsal.