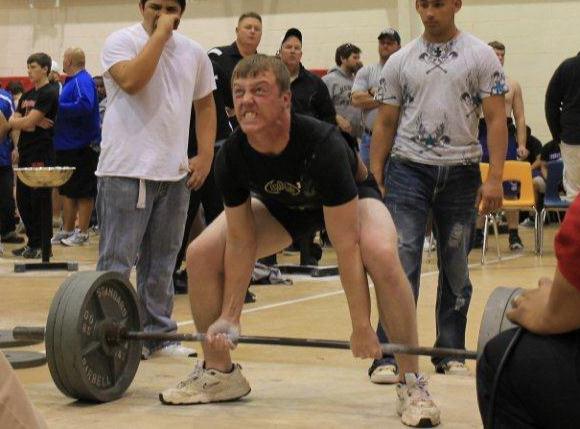 Nathaniel Gill dead lifts at the Regional meet under the watch of Coaches Ron Holson and Steve Smith (rear center, l-r).
(Click the above photo to see additional photos)

Senior Dale Diaz led the Post delegation to Sundown seeded 7th place in the 242 pound weight class and finished the year as the 7th seed in the region.  Diaz squatted 525, benched 285 and dead lifted 365 for a total meet lift of 1175 pounds.  His top performances for the season except for the dead lift.  He hoisted 405 pounds in January at the Levelland meet.

Nathaniel Gill, a junior, went in seeded 7th in the region but was unable to finish the meet due to bombing out in the dead lift.  Gill competed in the 198 lb. weight class.  His personal best lifts for the season were 485 on the squat, 285 on the bench and a 470 pound dead lift.

Sophomore D.J. Brown entered the meet seeded 4th in the 148 pound weight class.  He was disqualified for dumping in the dead lift.  Brown's best personal bests were 405 on the squat, 255 on the bench and a 425 pound dead lift.

Christian Perez, a rookie freshman,  improved his status at the meet entering ranked 10th and finished as the 8th best lifter in the region in the 123 lb. weight class.  He finished the meet with a total of 765 pounds.  His personal bests for the season were a 325 squat, a 150 bench press and a 315 pound dead lift.

Coach Holson told The Garza Post "it was a pleasure to work with these boys this season and I look forward to a great deal of success in the future.  Their efforts are greatly appreciated. We hope to take a larger number of team members to regionals next year."