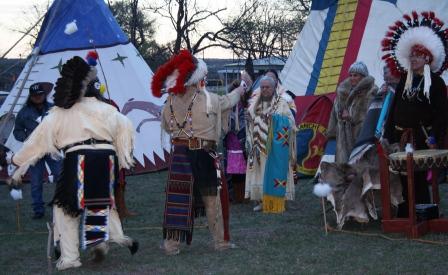 Ken LeBlanc (center with red/white head dress) points toward the West indicating the direction of the wind at sunrise on March 22. The Taba'na Yuan'e economic forecast for the coming year is "fair."
(Click the above photo to see additional photos)

Approximately 50 gathered at the Post City Park to observe the annual Taba'na Yuan'e Ceremony on March 22.  At sunrise the wind was out of the West, predicting a "fair" agriculture and economic year for the region.  While not the best news, "fair" is a better forecast than the past two years when the wind direction predicted "poor" conditions.  Post City Celebrations, Inc. provided a free breakfast for those attending.

The "Sunrise Wind" ceremony, which is culled mostly from Comanche culture, is performed each year on March 22.  According to the legend passed down by Chief Runkles, the wind must be checked at sunrise on the day after the sun reaches the halfway point in its journey from south to north.  The wind direction will determine the success of the coming year - success of crops for the farmer; grass prospects for the rancher and the economic outlook for the merchant.  Observers from throughout the region have joined Garza County folks to watch the historic ceremony that began over 100 years ago.

This local ceremony has far-reaching influence.  Each year the Chamber office reports numerous calls from near and far asking for the results of Taba'na Yuan'e.