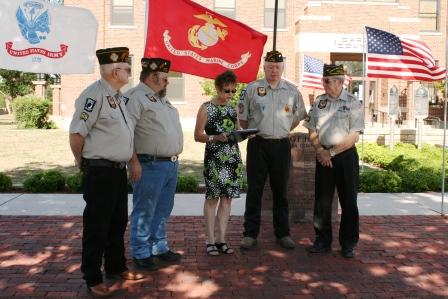 Representatives of local VFW Post 6797and Mayor Harp gathered at the Garza County Courthouse this morning to commemorate "Loyalty Day,"  The mayor read a proclamation from the City of Post declaring May 1 "Loyalty Day" in the community.

May 1 was made an official holiday by the U.S. Congress in 1958 and was first observed nationally by President Dwight D. Eisenhower in 1959.  It is a legal holiday although many U.S. citizens are unaware of it and it is not commonly observed.

Here is a portion of the President's proclamation regarding Loyalty Day 2012:

In order to recognize the American spirit of loyalty and the sacrifices that so many have made for our Nation, the Congress, by Public Law 85-529 as amended, has designated May 1 of each year as "Loyalty Day." On this day, let us reaffirm our allegiance to the United States of America, our Constitution, and our founding values.

IN WITNESS WHEREOF, I have hereunto set my hand this first day of May, in the year of our Lord two thousand twelve, and of the Independence of the United States of America the two hundred and thirty-sixth.