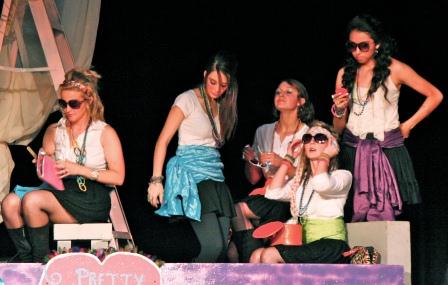 "The Pretty Penelope" crew sails in The Pirate Show produced by the PHS Theater Department as part of the dinner theater fund raiser on May 5.
(Click the above photo to see additional photos)

The Pirate Show was A Night to Remember

It was a laughter filled fun night with good food and entertainment May 5 compliments of the Post High School Theater Department.

The two part fund raising evening began at the school cafeteria with 'A Night to Remember' featuring a buffet meal catered by River Smiths of Lubbock and a special hour of live music performed by the Post Theater Singers.  Many performed solos and duets with support from all 19 student participants.

The family production team of PISD teachers Leslie, Tim and Laurel Tatum put together the department's third and final project of the school year.  The dinner music was included because "we knew that we wanted the kids to sing," said Leslie.  "We let them (students) determine the song choice if they wanted to, but mostly we tried to just match the songs with their voices. For instance, Kelsey Griffin chose "Hold My Heart" and Kari Dunn chose "Here You Come Again," but the directors chose "Sweet Caroline" for Zach Quinonez because he has the same qualities in his voice as Neil Diamond. We also knew who our audience would be and tried to choose songs they would enjoy. The kids (as a group) had wanted to sing Journey's "Don't Stop Believing" for a long time. The kids had never heard "Unforgettable" (performed by Rosetta Taylor and Quinonez) but they loved it from the first."

After the dinner with music segment, theater goers migrated to the adjacent auditorium for 'The Pirate Show' by playwright Craig Sadaro.  After seeing it performed at a festival last year, the Leslies thought it was a good fit for the current theater talent and for the short five week rehearsal time frame.  Leslie said that "It is a really funny show.  With comedy you have so many more opportunities to make it even funnier.  And that's what they (cast members) did! They came up with many of the funniest parts of the show themselves. It was a joy to produce because these kids really get into anything they do."

The play is about a band of English Pirates (women) on “The Pretty Penelope” ship trying to beat a band of Spanish Pirates (men) called “The Bandidos Locos” to a buried treasure. On the way they each pick up a stowaway and end up buying an Orphanage to save the residents from their evil caretaker.

Leslie Tatum told The Garza Post she's very pleased with the seniors involved in theater department.  "I have so much to say about our seniors: Kari Dunn, Shirley Araiza, and Kambry Mason. First of all, I don't believe we have ever had such positive senior leadership from a group. These girls led by example with a strong work ethic, a strong spiritual focus, and a never-say-can't mentality. These young ladies are honestly the best of the best."

The fund raiser grossed about $3000 with proceeds to benefit the program.  "Our goal with the Theater Department at PHS is for kids to have a way to express themselves creatively and grow in as many ways as possible. We have formed a family unit that is extremely strong--that is a bonus that we didn't foresee and a blessing that we won't take for granted. Theater allows us to escape our problems for a while and to focus on others in a variety of circumstances. I believe that it has created kind, compassionate young people with a desire to put others above themselves. For that reason, I believe that it is a successful program," said Leslie.