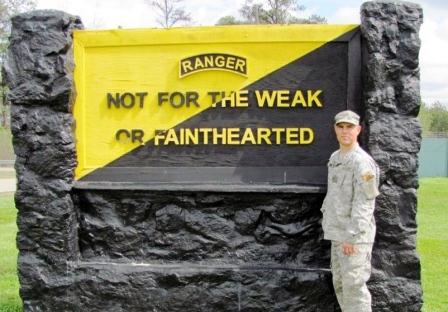 Describing the course, Gunn said, "We conducted day/night squad and platoon size patrols in the woods of Georgia, the mountains of Georgia and the swamps of Florida.  We also did a Mass Tactical Combat Equipment Airborne Jump from an Air Force C-17 and several day/night air assaults via Blackhawk helicopters."

Gunn's wife, Kara is originally from Ft. Worth, TX; his parents are:  Deana and David Watson of Post; Ray and Jennifer Gunn of Carrollton, TX

According to the Ranger School web site, soldiers who participate in this school "haven proven themselves as a leader." The first hase of Ranger School, of which only 50% of sodiers complete, is designed to assess a soldier’s physical stamina, mental toughness, leadership abilities, and establishes the tactical fundamentals required for follow-on phases of Ranger School. A soldier learns to sustain himself, his subordinates, maintain his mission essential equipment, and accomplish the mission under difficult field training conditions.

During the Mountain Phase at Camp Frank D. Merrill in the North Georgia Mountains, students receive instruction on military mountaineering tasks, mobility training, as well as techniques for employing a platoon for continuous combat patrol operations in a mountainous environment. They further develop their ability to command and control platoon size patrols through planning, preparing, and executing a variety of combat patrol missions.

Camp James E. Rudder, located on Eglin Air Force Base in northwest Florida, serves as the home of the third and final phase of Ranger School. This phase focuses on the continued development of the Ranger Student's combat arms functional skills. Students receive instruction on waterborne operations, small boat movements, and stream crossings upon arrival.

Gunn is currently awaiting orders for US Army Ranger Regiment.