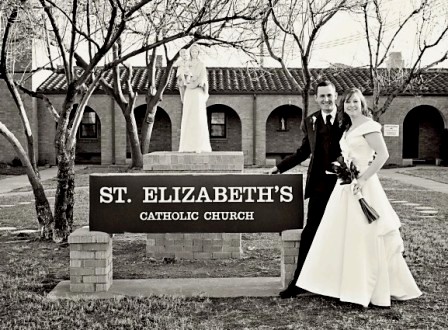 Kelsey Wimmer and Jacob Cornwall were united in marriage on February 25, 2012 at St. Elizabeth's Chapel in Lubbock. Father Jeff Poirot of Ft. Worth presided over the double ring ceremony.

Given in marriage by her father, the bride wore an ivory Oleg Cassini A line satin gown with an elegant off the shoulder neckline with a ruches surplus bodice and belted empire waist. The dress was complimented by a beautiful chapel length train and red western boots. For her wedding, the bride carried a bouquet of red roses and white calla lilies hand tied with an ivory satin ribbon. Tucked in the pocket of the dress, the bride carried a blue handkerchief that belonged to the groom's great-great grandmother. In her boot was a penny placed by the groom's father and minted in 1983 signifying the year the couple was born.

Serving as maid of honor was Tracy Cox, former roommate and friend of the bride. Bridesmaids were Kristen Norris, step-sister of the bride and Lauren Oliver, cousin of the bride. The bridal attendants wore black sleeveless knee length dresses and carried bouquets of long-stem red roses.

The groom wore a charcoal grey vested suit and an ivory shirt and black tie.

Best man was Matt Meinen, college roommate and friend of the groom. Groomsmen were Matt Boyd and Chris Jimenez, both friends of the groom. The grooms attendants wore black tuxedos with black vests and ties.

Programs were handed out and guests were greeted as they arrived by Shelby Cornwall, sister of the groom and Tayla Mosser, cousin of the bride.

Music for the wedding was provided by Cynthia Merrell on the pipe organ with vocal accompaniment by her husband Cres. During communion, Nathan Rangel played Ave Maria on the violin.

Following the ceremony, a dinner and dance was held at Hanley Hall with music provided by Allen Lester. The wedding party was introduced as they arrived by Randy Cook, uncle of the bride. A buffet of fajitas with all the trimmings awaited the guests as they arrived at the reception.

The bride is a 2001 graduate of Post High School. She received a bachelor of arts degree and a masters in accounting from Texas Tech University. She is employed at Red Oak Water Transfer in Fort Worth as the chief financial officer. She is a CPA.  The groom is a 2001 graduate of Graford High School and received a bachelor of arts degree from Sam Houston State University and a master of business administration degree from the University of Texas at Arlington. He is employed at XTO Energy in Fort Worth as a senior auditor.

Following the wedding the couple traveled to Ruidoso for a few days of rest and relaxation at a cabin built by the bride's grandparents around the time she was born and now owned by her aunt and uncle, Annette and Randy Cook. They will honeymoon in September in Scotland.

A rehearsal dinner was held at the home of Steven and Dolores Mosser in Lubbock and catered by the Knights of Columbus of St. Elizabeth's Church. Being the first Friday of Lent, the menu was fish.

The couple will reside in Ft. Worth.